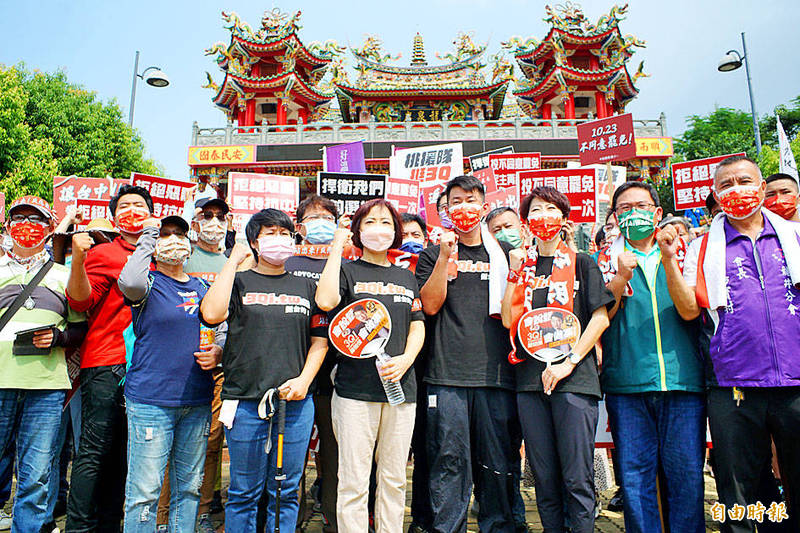 With the recall vote scheduled for Saturday, attendees gathered in the morning at Qingshui Zushi Temple in Longjing District （龍井）, most of them joining Chen in the “100 Hours March, Walk the Final Mile for Democracy” event.

Among the groups at the event were the Humanistic Education Foundation, Taiwan Society, Taiwan Youth Foundation, Deng Liberty Foundation and Union of Taiwan Teachers.

“There has been a series of revenge recall campaigns,” Humanistic Education Foundation executive director Joanna Feng （馮喬蘭） said. “Basically, they have all attacked civic groups and we must oppose these vicious, politically motivated groups that are trying to wreck the foundations of our democratic system.”

Chen has done a lot at the legislature and in service of his local constituents in the past two years, Tsai said.

“This revenge recall is based on lies and smears on Chen’s character,” Tsai said. “Character assassination is the opposition’s means of inciting hatred and grabbing power.”

The recall effort, which has been backed by Chinese Nationalist Party （KMT） politicians, was initiated by Yang Wen-yuan （楊文元）, who said he voted for Chen in January last year, but regrets that choice.

Chen’s opponents say he has behaved outrageously in the legislature and supported the government’s decision to lift a ban on imports of pork containing residue of the feed additive ractopamine.

There are 291,122 eligible voters in Chen’s constituency, Taichung’s Second District.

For a recall vote to pass, at least 25 percent of eligible voters — or 72,781 in Chen’s case — must vote in favor of it, and they must outnumber those who vote against it.