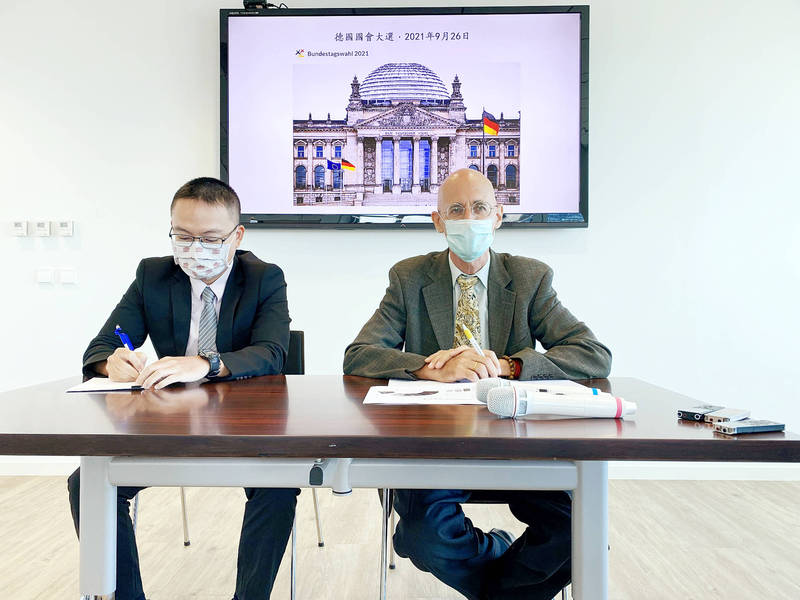 IMPROVING COOPERATION: No matter the outcome of the German election, lawmakers would be interested in forming a delegation to visit Taiwan, Jorg Polster said

It is the first time the German Institute Taipei has held a briefing on Germany’s parliamentary election, which is “very important,” said Polster, who spoke in German with a Chinese interpreter.

Over the past few months, Germany’s electorate seemed to have undergone some changes regarding their choices, with the margins between the Social Democratic Party and German Chancellor Angela Merkel’s Christian Democratic Union and its smaller sister party the Christian Social Union in Bavaria being close, he said, adding that the Green Party was expected to garner more votes.

More observation is needed before knowing how the new German government would approach its relations with Taiwan and China, he said.

Germany last year launched an Indo-Pacific strategy, including a plan to send a patrol vessel to the South China Sea, Polster said.

How the new government would approach the Indo-Pacific strategy would also need more observation, he added.

German lawmakers’ understanding of Taiwan is mainly focused on the security of the Taiwan Strait and Taiwan’s success in curbing the COVID-19 pandemic, he said.

Lawmakers would certainly be interested in forming a delegation to visit Taiwan, but how to make that happen during the pandemic would need to be deliberated after the new government is formed, he said, adding that he hopes to arrange a visit together with the Taipei Representative Office in the Federal Republic of Germany.

In July, TSMC said it was evaluating the feasibility of constructing a semiconductor fabrication plant in Germany.

Berlin welcomes the firm’s establishment plan, Polster said, adding that the east German state of Saxony would be a suitable location.

While he has not yet met with TSMC’s leaders, as a physicist, he would like to learn more about the company’s plans for the new fab, as well as other developments, he said.

Germany and Taiwan have many small and medium-sized enterprises, so he hopes to learn more about their operations in Taiwan, Polster said, adding that he is interested in visiting Taiwan’s science parks.

Other areas for ongoing cooperation include energy, culture, aviation and judicial exchanges, he said.

Taiwan and Germany regularly hold energy forums, with offshore wind energy being a sector of common interest, he said.

Considering there are many similarities between Taiwan’s judiciary system and Germany’s, he would also like to have more bilateral exchanges on legal institutions and judges, he said.