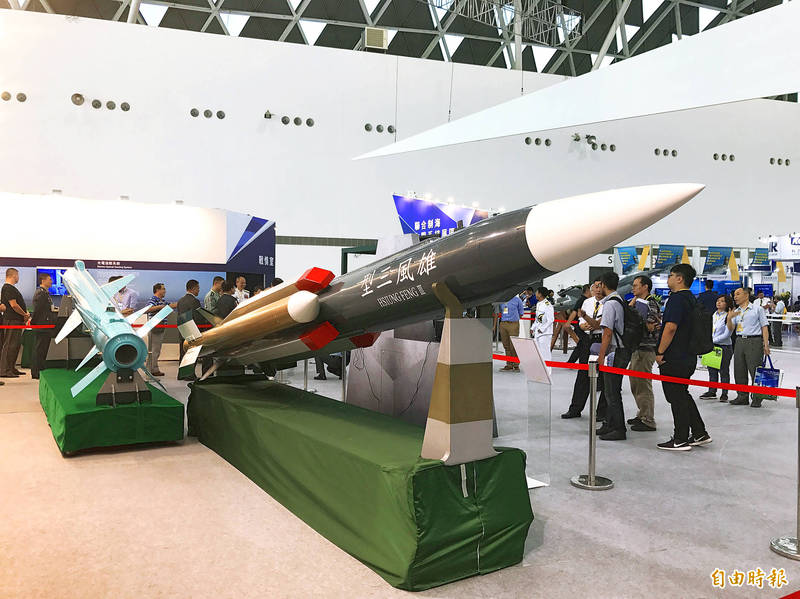 BOOSTING DEFENSE: With the production of most new equipment ready to start, the Chungshan Institute of Science and Technology expects a revenue surge next year

The Executive Yuan on Friday revealed the schedule for Taiwan’s indigenous missile and warship production.

The schedule is part of a draft bill on the nation’s sea and air combat power enhancement program that the Cabinet submitted to the legislature.

The NT$240 billion （US$8.65 billion） program, to be implemented from next year to 2026, would also include the acquisition of long-range cruise missiles, upgraded air defense systems and modern warships.

The Chien Hsiang loitering munition, which has entered mass production, would be produced under the program from next year to 2025, it said.

A long-range variant of the Hsiung Feng III supersonic anti-ship and land-attack missile, which has a claimed effective range of 400km, would be produced from 2023 to 2026, it said.

The Hsiung Feng I and Hsiung Feng II missiles’ coastal defense variants and their dedicated road-based mobile launch vehicles would be produced from next year to 2026, the bill said.

As for naval equipment, two phases of production of Tuo Jiang-class corvettes are planned, it said.

The Coast Guard Administration’s Anping-class patrol vessels would be retrofitted with missiles, and command and control facilities between 2023 and 2026, it said.

Procurements of the surface-to-air variant of the Tien Chien II missile and the Tien Kung III missile defense system would be integrated in the program, with production from next year to 2026. it said.

The state-owned Chungshan Institute of Science and Technology, which designed most of the program’s equipment and oversees the nation’s missile production, said in a report that it expects revenue to increase 50 percent to an unprecedented NT$95.39 billion next year.