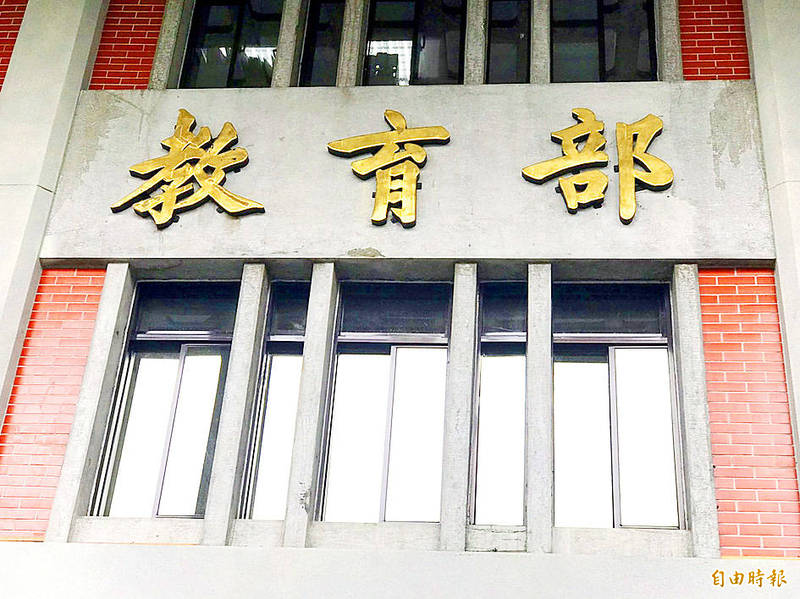 An entrance to the Ministry of Education in Taipei is pictured in an undated photograph. Photo: Rachel Lin, Taipei Times

COSTLY TECH FAILURE: More than 25,000 files for nearly 8,000 students from 81 schools were lost when system administrators updated a server, the Ministry of Education said

The academic records of 7,854 high-school students have been lost due to a hard-drive failure, the Ministry of Education said yesterday.

The records were being stored at National Chi Nan University, which was commissioned by the ministry’s K-12 Education Administration to host a computer server of student portfolios that universities could access to evaluate their applications.

Under a program introduced in 2019 for high-school students starting that year, students are to create portfolios to be used for university applications, which include their grades, extracurricular activities and other information related to their character and achievements.

System administrators discovered that files were missing when rebooting the system, the ministry said, adding that 25,210 files for 7,854 students from 81 schools were lost.

On Sept. 5, the university began moving the files into a centralized system to meet government information-security regulations, which require bottom-up management of protected information, the ministry said.

“The files were moved to a virtual machine in the university’s new server room. On Wednesday, the system had to be restarted due to an update, which is when the problem was discovered,” it said.

K-12 Education Administration official Chang Yung-chieh （張永傑） said the issue appears to have affected only students who uploaded their information to the system between Sept. 5 and Wednesday.

Information uploaded prior to Sept. 5 has been backed up, he added.

The administration had already contacted the system’s software developer for assistance with file recovery, he said, adding that the developer had also contacted the affected students’ schools to inform them.

Students with their own copies of the missing files should re-upload them as soon as possible, he said.

“We have already checked all of the systems to ensure there are no more errors in the settings that would cause a repeat of the incident,” he said. “We are also requiring that the system be monitored by two different people every day, as a preventive measure.”

The administration would also require backup files to be maintained and stored in the university’s server room, as well as at an offsite location, he said.

“We are deeply sorry to the students and teachers affected, and will make the students’ rights and interests our top priority in handling the matter,” he said.

Parents should not panic, as students can still submit preliminary documents for their university applications, and provide other portfolio documents later when they are recovered, Kao said.