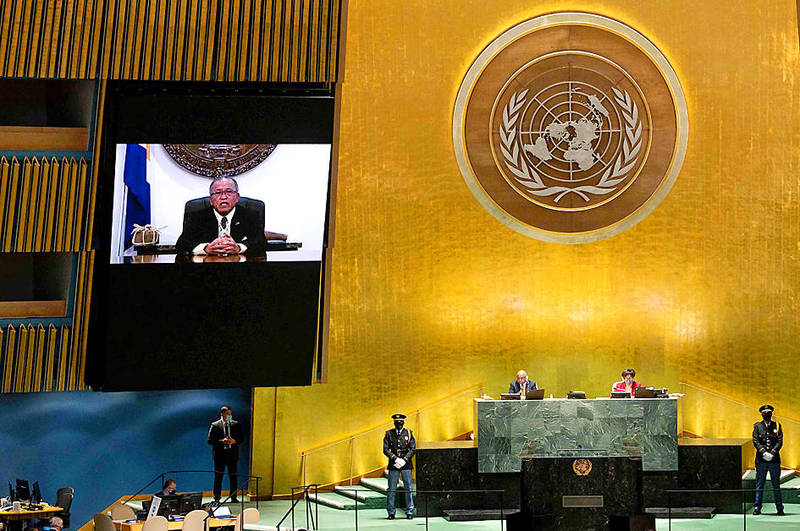 SUPPORTIVE ALLIES: Marshall Islands President David Kabua said: ‘General Assembly Resolution 2758 affords nothing to hide behind, as it expresses no position on Taiwan’

Marshall Islands President David Kabua on Wednesday urged the UN to put an end to the “shameful silence” on Taiwan’s exclusion from the UN system.

In his 15-minute pre-recorded address to the UN General Assembly in New York City, Kabua said that collective action is needed from all countries, stakeholders and people to ensure a resilient recovery from the COVID-19 pandemic.

“The democratic government of Taiwan should be allowed to participate in an equal and dignified manner within the UN system,” Kabua said, adding that this would include the WHO, the International Civil Aviation Organization, the UN Framework Convention on Climate Change and the UN’s Sustainable Development Goals.

“There is absolutely nothing in General Assembly Resolution 2758 which prevents this inclusive approach, and this resolution affords nothing to hide behind, as it expresses no position on Taiwan,” he said.

“As a people-centric institution, the UN cannot ignore the Taiwanese people or continue to use their nationality to exclude them from attending public meetings or public tours at its headquarters. The shameful silence must end,” Kabua said.

Taipei has over the past few years reiterated its position that the resolution is concerned with the representation of China, not Taiwan, and that it does not describe Taiwan as part of China, nor does it authorize Beijing to represent Taiwan in the UN system.

Guatemala believes that Taiwan can provide “experience, capacities and knowledge” to boost multilateralism at a time when the world is facing challenges, he said.

Honduran President Juan Orlando Hernandez, the third leader of an ally of Taiwan to speak in front of the UN on that day, did not mention Taiwan in his address, marking the sixth consecutive year that the Central American ally did not speak up on behalf of the nation at the General Assembly.

Instead, Honduras sends a letter to the UN secretary-general each year to support Taiwan’s participation in the UN system.

Nauru, an ally of Taiwan in the Pacific, was expected to speak yesterday after press time.

Taiwan left the UN in 1971, and Beijing took its place.

Since then, the nation has been excluded from the General Assembly and other UN agencies.