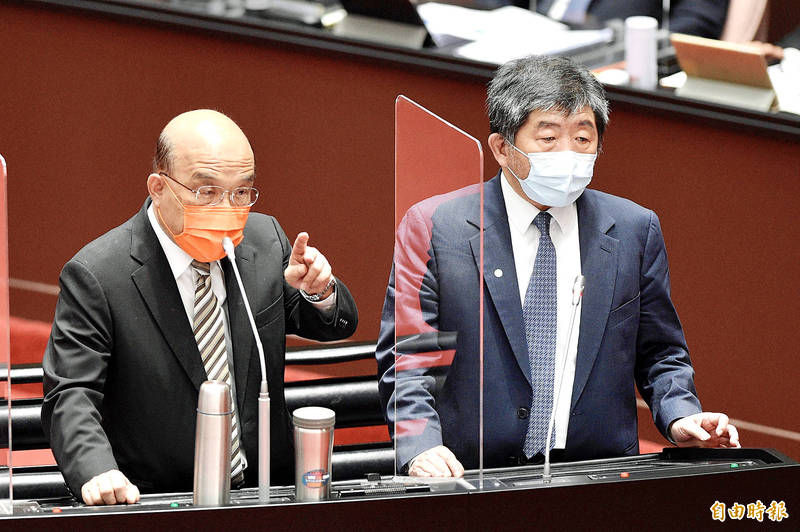 ‘GREAT PROGRESS’: American Institute in Taiwan spokesman Ed Dunn said that all foreigners traveling to the US must show proof of two jabs from early November

Taiwan is expected to have 70 percent first-dose vaccination coverage by the end of next month, Premier Su Tseng-chang （蘇貞昌） told a question-and-answer session at the Legislative Yuan in Taipei yesterday, touting the nation’s response to COVID-19 as the envy of many countries.

Answering legislators’ questions, Su said that with good cooperation between the central and local governments, Taiwan is expected to have a first-dose vaccination rate of 60 percent by beginning of next month and a rate of about 70 percent by the end of the month.

“In four months, Taiwan has made great progress, from less than 1 percent first-dose coverage in May to about 50 percent currently. Right now, 11.6 million people in Taiwan have received their first shot,” he added.

Taiwan places near the top of Bloomberg News’ monthly COVID Resilience Ranking of major economies that have best fought the pandemic, Su said.

“We are among the leaders in the latest ranking, and many countries around the world are envious of us for getting the pandemic under good control,” he added.

Asked about the government’s delayed vaccine procurement, Su said: “Early on, Taiwan had a stable COVID-19 situation, without many cases, so most people were unwilling to get vaccinated.”

Chinese Nationalist Party （KMT） Chairman and Legislator Johnny Chiang （江啟臣） told Su: “If we cannot reach 70 percent coverage by the end of the year and have not procured more vaccines, you should resign.”

Chiang criticized the government’s vaccine procurement for a lack of transparency, but Su said that the sourcing is being worked on at all levels of the government.

Other lawmakers questioned Minister of Health and Welfare Chen Shih-chung （陳時中） about the procurement process.

“We have a time table, but it is better not to publicize it,” Chen said, adding that the number of doses continually changes and countries would fight over the amounts if such details were announced.

“This is why manufacturers have requested for us not to divulge such information... The delivery schedule is kept under wraps for the same reason,” Chen said.

Yesterday, American Institute in Taiwan （AIT） spokesman Ed Dunn said the White House announced on Monday that from early November, all foreigners traveling to the US must show proof that they are fully vaccinated.

Asked about a US Presidential Proclamation allowing travelers from certain areas to enter the US with a National Interest Exception, Dunn said that the proclamation is to end in early November.

All foreign adults must be fully vaccinated before boarding a plane to the US, Dunn added.

Deputy Minister of the Interior Chen Tsung-yen （陳宗彥） said that Taiwan would keep in close touch with the AIT and the Taipei Economic and Cultural Representative Office in the US to understand how the policy is to be implemented.