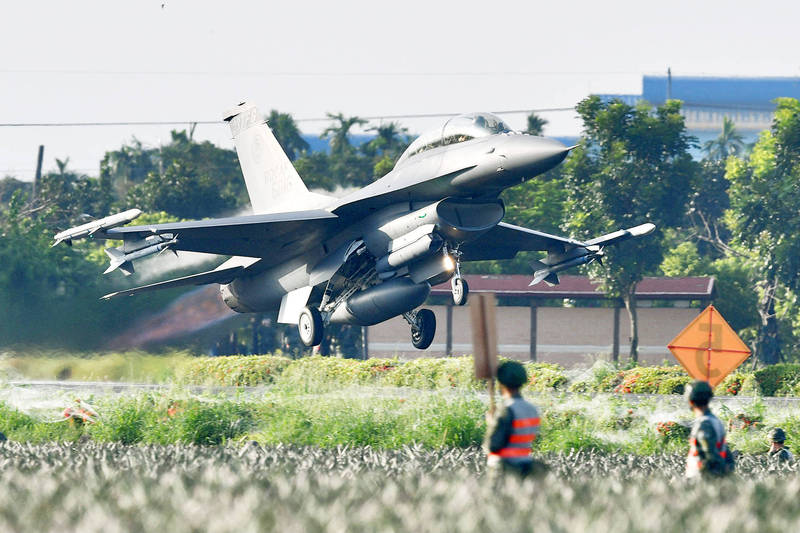 PINGTUNG EXERCISE: The pilots tested their ability to land on the 24m-wide provincial highway, preparing for a scenario in which dedicated airstrips are damaged

Emergency landing and takeoff drills for military aircraft were held on a provincial highway for the first time early yesterday as part of Taiwan’s Han Kuang military exercises, testing the ability of pilots and aircraft to land on narrow roads were airstrips to be damaged.

The drill began at 6:30am on a 2.26km section of Provincial Highway No. 1 linking Pingtung County’s Jiadong （佳冬） and Fangliao （枋寮） townships.

An Indigenous Defense Fighter, an F-16V, a Mirage 2000-5 and an E-2K early warning aircraft participated.

The drill tested the pilots’ ability to land on the 24m-wide road, preparing for a scenario in which the airstrips at Pingtung Air Base about 30km away are damaged by enemy forces, military officials said.

It marked the first time such a drill was conducted on a provincial highway, a regular roadway with traffic lights and intersections that runs between cities.

The Jiadong-Fangliao stretch of road is one of five in Taiwan to accommodate emergency military jet landings and takeoffs in the event of war.

The others are all on Sun Yat-sen Freeway （Freeway No. 1）, with two in Tainan — on the Madou （麻豆） and Rende （仁德） district sections — on the Huatan Township （花壇） section in Changhua County and on the Minsyong Township （民雄） section in Chiayi County.

Exercises have previously been conducted on the freeway sections.

Drills planned for the Jiadong-Fangliao section in 2011 were canceled due to poor weather.

The drill was watched by President Tsai Ing-wen （蔡英文）, Minister of National Defense Chiu Kuo-cheng （邱國正）, senior government and military officials, as well as the media.

Institute for National Defense and Security Research analyst Shu Hsiao-huang （舒孝煌） said that yesterday’s drills were important, as the freeway sections are easy targets for enemy fire and thus more likely to be destroyed during wartime.

It is important that the air force ensures its pilots can land on regular roads, he said.

Institute researcher Su Tzu-yun （蘇紫雲） said that compared with landing on freeways, landing on regular roads is much more challenging for aircraft, pilots and ground control crews, because they are narrower and closer to civilian buildings.

The drill was a pressure test for all of the military personnel involved and mimics actual combat experience, Su said.

Yesterday’s drill was part of the postponed live-fire component of this year’s Han Kuang military exercises, which began on Monday and are to conclude tomorrow.

In related news, the Wanan air defense drill was held across Taiwan, although civilians were not required to shelter in place.

The 30-minute drill, designated No. 44 this year, began at 1:30pm with the sounding of air-raid sirens.

The usual suspension of vehicular and pedestrian traffic was not imposed this year, with people allowed to go about their daily routines, the ministry said, citing COVID-19 guidelines issued by the Central Epidemic Command Center to prevent large gatherings.

The drill was aimed mainly at raising awareness of emergency warnings to reduce the possibility of casualties and damage, particularly in the event of an air attack, the ministry said.

People received text messages at the start and end of the drill, which were to stress-test “defense updates,” “air-raid warnings” and “text message delivery capabilities,” it said.