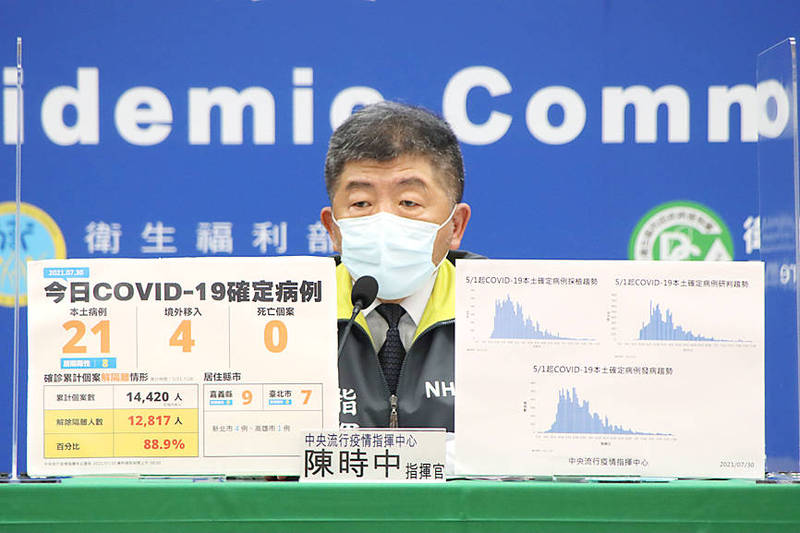 MAKING CONNECTIONS: Of the 21 new local COVID-19 infections reported yesterday, nine were linked to a Chiayi cluster, with one reportedly having recently lived in Taipei

A business in Chiayi County has reported 11 cases of COVID-19, with their source of infection possibly from northern Taiwan, the Central Epidemic Command Center （CECC） said yesterday.

At its daily news briefing, the center reported 21 new local cases — nine in Chiayi, seven in Taipei, four in New Taipei City and one in Kaohsiung, with no new fatalities.

Among them, 18 cases have known sources of infection, said Minister of Health and Welfare Chen Shih-chung （陳時中）, who heads the center.

The nine cases in Chiayi have been determined to be part of a cluster at a workplace, which has accumulated 11 cases, including two relatives of employees, he said.

Among the cases, two had traveled to northern Taiwan, he added.

While there are not many employees at the business, which Chen did not identify, the virus might have been developing at the site for quite a while, he said.

Seventy-eight people related to the cluster have received virus testing, including 10 who tested positive, while 11 people are awaiting tests, he added.

According to local media reports, the cluster is linked to a factory in Shueishang Township （水上）.

Due to the new cases, the county government yesterday reinstated a ban on restaurant dine-in services and public events until Friday next week. It previously lifted the restriction after a nationwide COVID-19 alert was lowered to level 2 on Tuesday.

The Chiayi City Government followed suit in reimposing the ban on dine-in services and public events.

Asked if Chiayi County’s cluster might be related to Taipei’s Wanhua District （萬華） cluster, as one infected employee reportedly lived there until two weeks ago, Taipei Deputy Mayor Vivian Huang （黃珊珊） said the city government would investigate the matter should it receive confirmation of the cases’ ties to Taipei.

The CECC also reported four imported cases, who are three Taiwanese returning from the US, the Philippines and Indonesia and one American who came to Taiwan for work.

Among nine imported cases reported from Friday last week to Thursday, seven involve the Delta variant of SARS-CoV-2 and one the Alpha variant, said Centers for Disease Control Deputy Director-General Philip Lo （羅一鈞）, who is deputy head of the CECC’s medical response division.

As of yesterday, the center has identified 42 people who have the Delta variant, including 30 imported and 12 local cases, he said, adding that all the local infections were related to a cluster in Pingtung County.