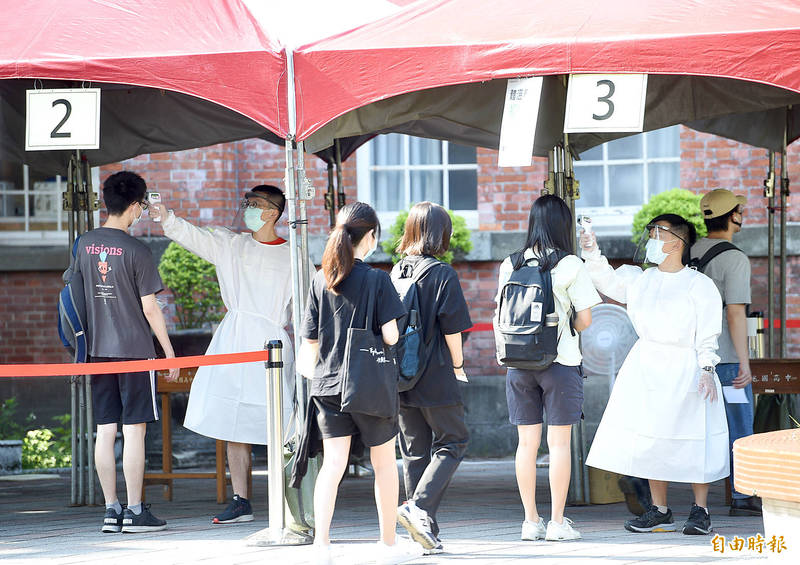 Examinees wearing masks have their temperatures taken in Taipei yesterday as they arrive for the Advanced Subjects Test for university entrance. Photo: Peter Lo, Taipei Times

THE HOME TEAM: DPP Legislator Kao Chia-yu said she canceled her booking for an AstraZeneca shot as soon as she heard that the Medigen vaccine was an option

President Tsai Ing-wen （蔡英文） yesterday said that she would get inoculated with the COVID-19 vaccine manufactured by Taiwan-based Medigen Vaccine Biologics Corp （高端疫苗）.

Tsai wrote on Facebook that she had registered for her first vaccine dose using the national online COVID-19 vaccination booking system, which allows people to indicate their preferred vaccine brand and to make an appointment when the shot becomes available.

Tsai said that she opted for the Medigen vaccine — one of three now available on the system, along with the AstraZeneca and Moderna vaccines — even though Medigen has yet to deliver any doses or provide a delivery schedule.

“The government will only supply vaccines that are safe, effective, legitimate and in line with scientific standards,” Tsai said, in a gesture of support for the Medigen vaccine.

The Food and Drug Administration last week granted the Medigen vaccine emergency use authorization （EUA）, even though the drugmaker has yet to complete phase 3 clinical trials.

Approval was given because the neutralizing antibodies generated in Medigen vaccine recipients compared favorably with those generated in AstraZeneca recipients, a concept known as immunobridging.

The concept has been discussed internationally, but no consensus or standard has been reached regarding its use. Taiwan is the first country to use it for vaccine approvals.

The government has contracted to purchase 5 million doses of the Medigen vaccine.

People aged 20 or older can be inoculated with the vaccine, which requires two doses administered 28 days apart.

The FDA has yet to approve an EUA for the United Biomedical vaccine. The drugmaker presented the data from its phase 2 clinical trials and submitted an EUA application to the FDA at the end of last month, hoping to follow on Medigen’s coattails, but this week the FDA said that it must submit additional documentation before a review can begin.

Separately yesterday, a number of Democratic Progressive Party （DPP） lawmakers said that they had signed up to receive the Medigen vaccine.

Among them was Legislator Kao Chia-yu （高嘉瑜）, who said that she canceled her registration for an AstraZeneca shot as soon as she heard that Medigen was available.

She would wait for a Medigen shot, because she wanted to support the nation’s biotech industry, Kao said, adding that the vaccine has the fewest side effects and is the safest option, although efficacy information would not be available until the phase 3 trials are done.

DPP Legislator Tsai Yi-yu （蔡易餘） said that he jumped at the opportunity to register for Medigen when the new registration period opened on Tuesday.

As long as a vaccine is effective, it is a good option, he said, expressing the hope that everyone would stand united on the matter.

DPP Legislator Tsai Shih-ying （蔡適應） said he also signed up on Tuesday, selecting Medigen as his only choice.

The successful development of a vaccine is not simply a corporate achievement, but holds strategic significance for the nation’s security, he added.

Across the aisle, Chinese Nationalist Party （KMT） Legislator Lin Wei-chou （林為洲） also announced that he had registered for the Medigen vaccine, based on the need for Taiwan to have its own vaccine industry.

However, as a member of the opposition party, Lin said that he must also criticize a lack of oversight in the approval process, as vaccines must be safe and effective.

By accepting Medigen, it leaves more doses of the international vaccines for the public, Lin said, calling on his colleagues to follow suit.