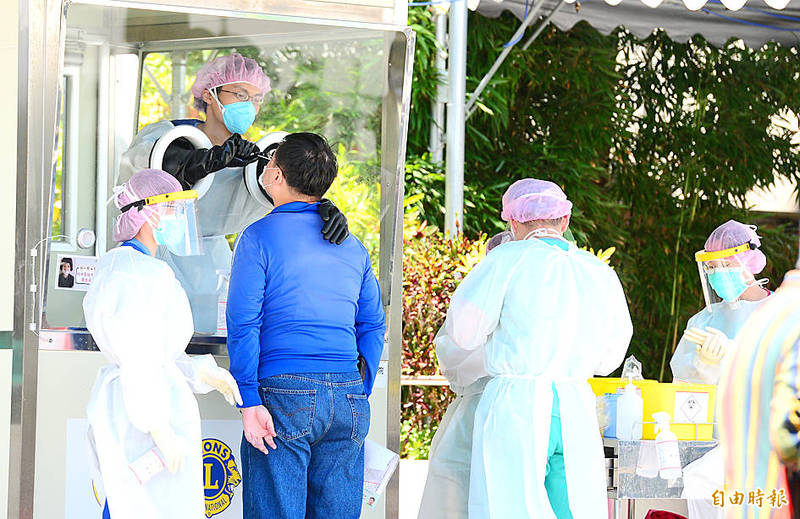 PREVENTING FATALITIES: The center said that a new expert group tasked with improving the treatment of severely sick patients would convene early next week

Of the local infections, 83 are male and 104 are female, with an onset of symptoms between May 29 and Thursday, Minister of Health and Welfare Chen Shih-chung （陳時中）, who heads the CECC, told a daily news briefing in Taipei.

New Taipei City had the most local infections, reporting 76 cases, followed by Taipei with 71 cases, Miaoli County with 26, Taoyuan with six, Keelung with four, Taichung with two, and one each in Hualien and Hsinchu counties, CECC data showed.

Of the 21 deaths, 12 were men and nine women, in their 50s to 90s, the data showed. They passed away between Thursday last week and Wednesday, and all of them had chronic diseases.

Among them was a man in his 70s who died on Sunday after his infection was confirmed on the same day, the data showed.

The man developed symptoms and was hospitalized on Saturday.

As for the regional distribution of deaths ascribed to the virus, New Taipei City has so far recorded the most fatalities, with 255, followed by Taipei with 206, Keelung with 17, Taoyuan with 14, Changhua County with eight, Taichung with four, Yilan and Hsinchu counties with two each, and Taitung and Yunlin counties as well as Kaohsiung with one fatality each, the data showed.

The new committee would be headed by National Taiwan University Hospital Hsinchu Branch superintendent Yu Chong-jen （余忠仁）, Chang said, adding that it would meet daily via videoconference, starting on Monday next week.

While a number of older people have died after receiving the AstraZeneca COVID-19 vaccine, a more thorough investigation is needed to determine whether there was a correlation, he said, adding that vaccinations are needed to curb the spread of the virus.

The nation has recorded 20 deaths of people older than 75 years who received the vaccine, Chang said.

However, 229,566 Taiwanese of this age group have been given the AstraZeneca jab, and among them, the nation recorded fewer deaths per capita than South Korea, Chang said.

As of yesterday, Taiwan had 13,771 confirmed cases of COVID-19 and 518 deaths, including 511 fatalities after local infections, center data showed.