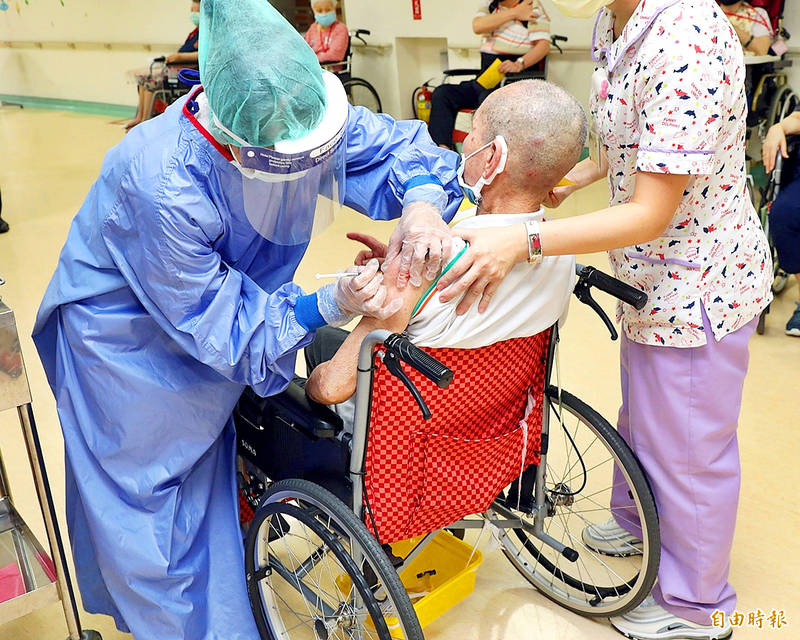 Medical staff administer a shot of the AstraZeneca COVID-19 vaccine to a person at a care home in Chiayi County yesterday. Photo: Wang Shan-yen, Taipei Times

The Central Epidemic Command Center （CECC） yesterday said that cities and counties with a higher risk of COVID-19 infection would receive 5 or 10 percent more vaccine doses in the next distribution round.

On Friday, 663,100 doses of the AstraZeneca COVID-19 vaccine, about half of the 1.24 million doses donated by Japan, were distributed to local governments.

Centers for Disease Control （CDC） Deputy Director-General Chuang Jen-hsiang （莊人祥）, who is the CECC’s spokesperson, on Saturday evening said that about 10,100 of the 91,000 doses distributed to Kaohsiung were for the military, so New Taipei City received the most doses at 83,000.

Minister of Health and Welfare Chen Shih-chung （陳時中）, who heads the center, yesterday said that the number of doses distributed was calculated based on the same principle for each area.

As public health specialists have suggested that infection risk stratification should also be taken into consideration, the center would provide 10 percent more doses to high-risk areas — Taipei and New Taipei City — in the next distribution round, which is expected to be on Tuesday or Wednesday, Chen said.

The center would also provide 5 percent more doses to medium-high risk areas, including Keelung, Taoyuan, Taichung, and Changhua and Miaoli counties, he said.

An additional 2,000 doses would be distributed to Lienchiang County in the next round, as medical resources on outlying islands are scarce and transportation is problematic, he added.

So as not to increase their risk of virus transmission, people aged 75 and older are recommended to get vaccinated at their nearest location, even if they are not living at their household registration location, Chen said.

However, he said that local governments should not race to vaccinate people, as they would still receive vaccine doses based on the allocation principle.