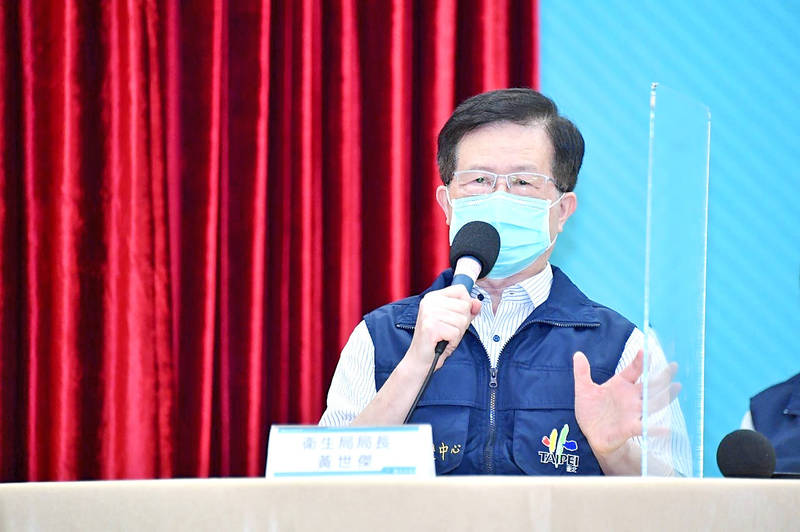 KO SAYS NO: Taipei’s health director said that a vaccine shortage made it difficult to get data from clinics, while two foundations apologized over their jabs program

Taipei Department of Health Director Huang Shier-chieg （黃世傑） yesterday tendered his resignation after 1,285 people were vaccinated for COVID-19 at a Taipei clinic without necessarily being eligible.

However, the resignation was not accepted by Taipei Mayor Ko Wen-je （柯文哲）.

The Good Liver Clinic （好心肝診所）, which has several branches, on Monday requested 15 vaccine vials, saying that it was to inoculate its 101 health workers, and on Tuesday requested an additional 100 vials.

However, the vaccines were also given to volunteers working at the clinic, and at the Good Liver Foundation and other personnel.

The Taipei City Government on Wednesday fined the clinic NT$2 million （US$72,192）, removed it from a list of approved inoculation sites and will no longer provide it with vaccines.

A severe shortage of vaccines has made it difficult for the department to obtain first-hand information from clinics, resulting in the Good Liver blunder, Huang said.

Huang claimed responsibility for the situation and said he tendered a verbal resignation.

The city government yesterday held a news conference stating that as of yesterday, six clinics — including Good Liver — had received 202 vials, enough to inoculate more than 2,000 people.

Ko apologized on the city government’s behalf, citing problems with internal regulatory measures, adding that its processes are being reviewed.

However, he did not accept Huang’s resignation, asking him to stay at his post until an investigation is completed.

Starting immediately, all vaccines issued by the department will be documented on the department’s Web site, including date of issue, destination, which category of eligible recipients are to get the shots and how many vials are issued, Ko said.

Later yesterday, the Good Liver Clinic said that the facility administered unauthorized doses because it believed all of the medical personnel in Taipei had been vaccinated.

In a statement apologizing for the incident, the Good Liver Foundation and the Liver Disease Prevention and Treatment Research Foundation said that they wanted to use the doses before they expire in August.

The Taipei Medical Association had sent a letter informing medical personnel to get vaccinated by Friday last week, leading them to assume that all health workers in Taipei had been vaccinated, the foundations said.

The foundations believed that the doses that were delivered on Monday and Tuesday had to be administered on the day of arrival, they added.

Volunteers, consultants, cleaners, plumbers, electricians and security personnel are important for the foundations’ operations, they said.

Its unvaccinated personnel would continue to be exposed to risks that could hinder a hepatitis prevention program, even if the COVID-19 situation is brought under control, they said.

In other news, Chinese-language reports said that Ministry of National Defense Hsinchu Armed Force Hospital superintendent Tsuei Yi-wei （崔以威） on Tuesday and Wednesday administered doses of the AstraZeneca and Moderna COVID-19 vaccines to his relatives, who are not medical personnel.

The hospital said that Tsuei’s relatives are in a high-risk category for infection, as they live with him, and they did not receive the jabs until all of the hospital’s personnel had.

Tsuei has apologized, as his inconsiderate action incurred a public outcry, and he asked for disciplinary action, the ministry said in a separate statement.

The ministry apologized for the incident and said it would launch an internal inquiry while reassigning the superintendent post.