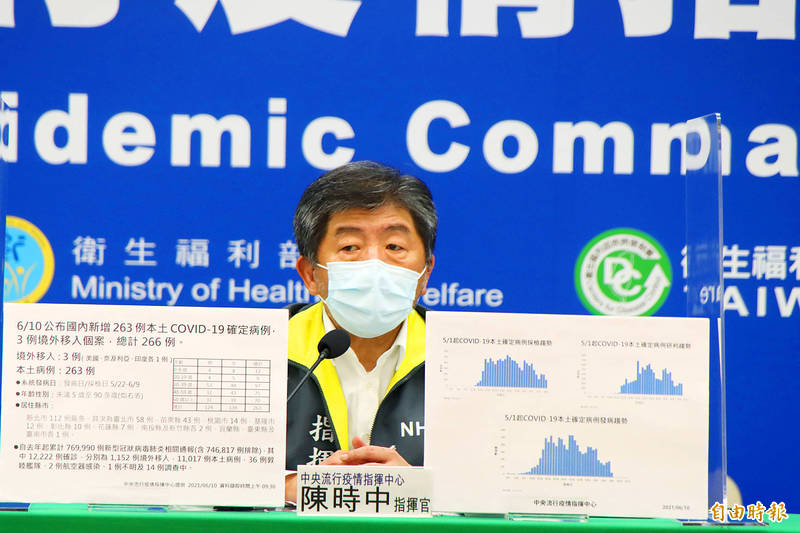 Of the new local cases, 124 are male and 139 are female, with their ages ranging from under five to older than 90, the center said.

The onset of their symptoms was between May 22 and Wednesday, it said.

New Taipei City had the most local infections, with 112 cases, followed by 58 in Taipei and 43 in Miaoli County, it said.

Taoyuan had 14 cases, Keelung had 12, Changhua County had 10 and Hualien County had seven, it said.

Nantou and Hsinchu counties reported two cases each, while Tainan as well as Yilan and Taitung counties each had one case, it added.

Of the 93 domestic cases reported outside Taipei and New Taipei City, 84 had known sources of infection, five had unclear connections with other cases and four were under investigation, it said.

The 28 deaths were 21 men and seven women aged in their 50s to 90s, while only three of them did not have chronic illnesses, CECC data showed.

Three new imported cases, all of whom are Taiwanese, included two men in their 30s who separately returned to Taiwan from India and Nigeria on Monday and April 14 respectively, and a woman in her 40s who returned from the US on Thursday last week, the center said.

While in the US, the woman on April 9 received a dose of the Pfizer–BioNTech vaccine and another on April 30, the CECC said.

While vaccines are effective at protecting people from developing a severe case and death, they do not guarantee “100 percent” protection from infection, Centers for Disease Control Deputy Director-General Philip Lo （羅一鈞）, who is deputy head of the CECC’s medical response division, told a news conference in Taipei.

From April 20 to Wednesday, 475 students had been confirmed to have COVID-19, up from 455 on Tuesday, Ministry of Education data showed.

Minister of Health and Welfare Chen Shih-chung （陳時中）, who heads the CECC, confirmed reports that Taiwan last year had been in talks with AstraZeneca about possibly authorizing Taiwan to manufacture its vaccine.

However, they did not reach an agreement, Chen said.

They were among 80 units manufactured by Japanese firm Hitachi, with six Taiwanese companies and civic entities funding the order, the CECC said in a news release, adding that the remaining 70 units would arrive in three weeks.

The units would be installed outdoors or at emergency rooms to help reduce direct contact between medical personnel and patients, it said, adding that it would distribute them to hospitals in need.

An Yilan City Council worker yesterday fills dragon boats with water to keep the wood moist and prevent it from cracking, as the boats are expected to go unused this year due to the cancelation of dragon boat races amid a COVID-19 outbreak. Photo courtesy of the Yilan City Council