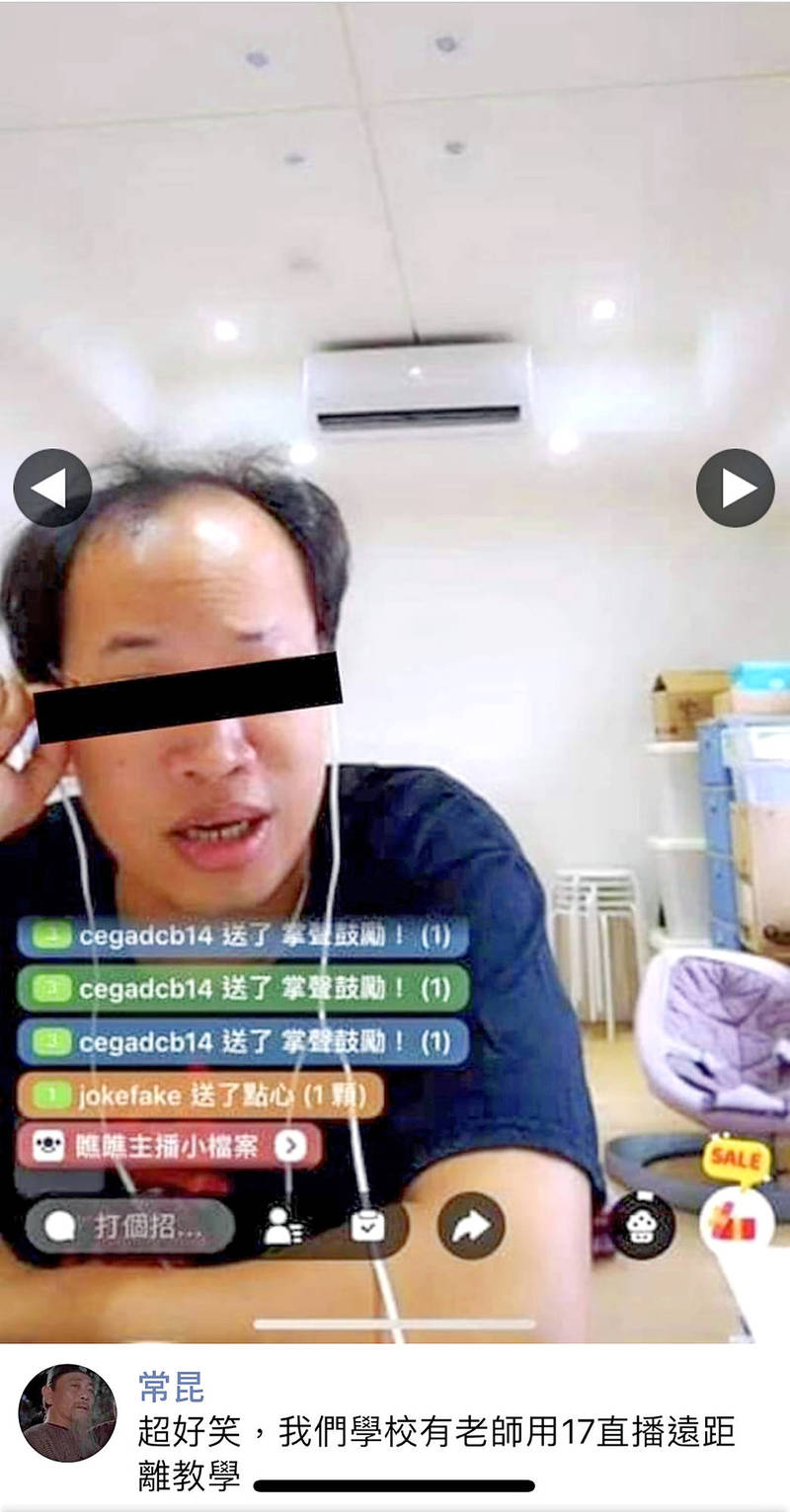 NO ACCESS TO APPROVED APP: Some students said that their teacher was ‘dope’ for using the platform once banned from app stores over pornographic content posted there

A teacher at Taipei Municipal Jianguo High School has become an Internet sensation after he was found to use 17Live, a livestreaming app previously known for pornographic content, for online teaching after a platform approved by the Taipei Department of Education crashed on Wednesday.

The Ministry of Education on Tuesday announced that schools nationwide would remain closed from the next day until Friday next week in light of rising local COVID-19 cases, prompting schools to move teaching online amid a nationwide level 3 pandemic alert.

However, Taipei CooC-Cloud （台北酷課雲）, the city-government approved digital learning platform, crashed on Wednesday due to a surge in traffic.

To ensure continuous teaching, the department allowed schools to use commercial platforms such as Microsoft Teams, Google Meet, Line and Facebook.

Wu Meng-huan （吳孟寰）, a geography teacher at the all-boys high school, gave his lessons through 17Live.

The platform, founded by Taiwanese-American rapper Jeff Huang （黃立成）, was the center of controversy in 2015 when users took it to stream pornographic content, contravening its license agreements.

The app’s reputation did not seem to bother Wu or his students.

One of them posted a screenshot of Wu teaching through 17Live on Facebook, later telling the Liberty Times （the Taipei Times’ sister newspaper） that he was not surprised by his teacher’s creative approach.

“I took his class in my freshman year, and he always struck me as a funny teacher,” he said.

Other students responded to the screenshot, saying that Wu was “dope.”

The platform said in a statement on Wednesday that it is exploring ways for the app to identify and authenticate teachers faster, as this would facilitate online teaching and protect students’ access to education.

Authentication for educational use would be similar to logging in to Facebook, 17Live said.

The app has features helping teachers taking attendance records and interacting with students, it said, adding that it has been using a content surveillance system “to eliminate streaming content that disrupts public order and adversely affects good social customs.”

“We also suggested that students not use emojis during online classes,” 17Live said. “The government should regulate some of the other platforms, as they contain a lot of audiovisual content that is inappropriate for children.”

The company said that the platform is dedicated to providing a wide variety of content, from live music by young artists to cooking shows.

However, it denied that the platform is seeking to reshape its image by focusing on online teaching.

“We have reduced our streaming latency to three seconds, which enhances teaching quality and shows our continuing commitment for diverse, quality content,” it said.