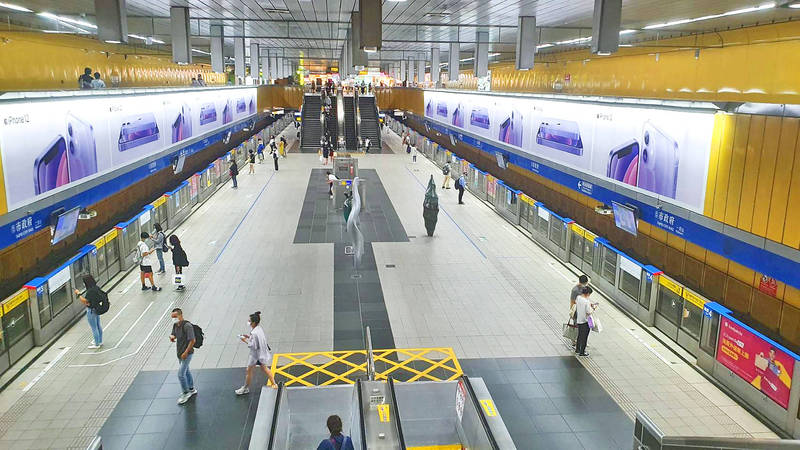 Few people wait on the platform of the Taipei City Hall MRT Station in Taipei yesterday. Photo courtesy of a member of the public

PITCHING IN: Minister of Health and Welfare Chen Shih-chung said that only 30 percent of electronic ticket cards have the user’s name and contact information

Commuters should ensure that their EasyCard, iPass and other electronic ticket cards have their name and telephone number on them for better contact tracing for COVID-19, the Central Epidemic Command Center （CECC） said yesterday.

Minister of Health and Welfare Chen Shih-chung （陳時中）, who heads the center, said that local officials voiced concern about people spreading the virus on their commute between Taipei and New Taipei City, as most of them take the cities’ MRT railway or public bus systems.

Only 30 percent of electronic ticket cards have the user’s name and contact information, he said.

“We urge commuters to travel with name-registered cards. If there are confirmed COVID-19 cases, we would have records of their travel routes, which would enhance contact tracing,” Chen said.

On Saturday, the number of people traveling on the Taipei MRT dropped by 1 million passengers after the center raised the COVID-19 alert for Taipei and New Taipei City to level 3 in light of surging cases in the two cities, Taipei Rapid Transit Corp （TRTC） said yesterday.

On May 8, 1.59 million people accessed the Taipei MRT system, while the number fell to about 590,000 people on Saturday, TRTC data showed.

Peak hours on weekdays on the Taipei MRT are generally from 7am to 9am, the metro operator said, advising people to take the MRT before 7:30am or after 8:30am to avoid crowded trains.

In other news, Chunghwa Post employees who work at its headquarters in Taipei have been instructed to arrive at work at a different time or to work from a different office building, as an employee was confirmed to have contracted COVID-19, the company said yesterday.

Chunghwa Post associate manager Kuo Chun-yang （郭純陽） said that the company disinfected its headquarters after being alerted by the employee.

The employee was not a post office clerk, so post office operations were not affected, Kuo added.

Residents of Taipei and New Taipei City should wear masks, bring their identification card, sign with their own pen, and accept express mail and packages outdoors or in well-ventilated areas, the company said, adding that they could request that mail be delivered to them through iPostbox instead.

Couriers are to wear masks, gloves and goggles or face shields when delivering mail, it said.

For mail requiring a signature on handheld PCs, couriers would take a photograph of the recipient to prove that the mail had been delivered, it added.

A man in Taipei’s Wanhua District yesterday prays at the gate of the Longshan Temple, which is closed to the public until June 8, like other temples, churches and mosques throughout Taiwan, because of the COVID-19 outbreak. Photo: Peter Lo, Taipei Times