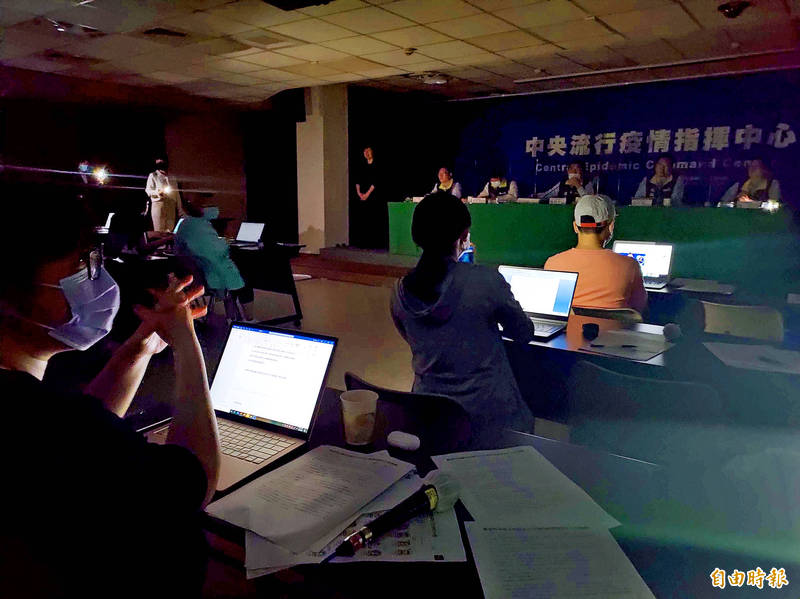 Journalists sit in near darkness amid a power cut at a news conference at the Central Epidemic Command Center in Taipei yesterday. Photo: Wu Liang-yi, Taipei Times

GRID PROBLEM: A Taipower spokesman said that the blackouts were not due to usage exceeding supply, nor were they because of a problem at the Singda plant

There were rolling blackouts across Taiwan yesterday due to a grid malfunction at the Singda Power Plant （興達電廠） in Kaohsiung’s Yongan District （永安）, while Taiwan Power Co （Taipower, 台電） said that it was working “as hard as possible to resolve the issue as soon as possible.”

At 2:37pm, a malfunction at an ultra-high-voltage substation in Kaohsiung’s Lujhu District （路竹） triggered four generators at the Singda plant to go offline, cutting power output by 2.2 million kilowatts and prompting Taipower to initiate rolling blackouts nationwide as it worked on the problem.

Taipower spokesman Chang Ting-shu （張廷抒） told a news conference in Taipei that the blackouts were not due to power usage exceeding supply, but a grid problem.

“Rumors that we ran out of power or something went wrong with the Singda plant are false” Chang said. “This is a grid malfunction.”

A bus, or connection feeder, had failed at the Lujhu substation, which caused the voltage to drop precipitously, Chang said.

As emergency controls kicked in, two coal-fired generators and two liquified natural gas generators were shut down at the Singda plant, he said.

The exact cause of the bus failure remains unknown, Chang said.

The rolling blackouts were implemented at 50-minute intervals, affecting 4 million customers in total, with the goal of having power fully restored sometime yesterday evening, Taipower said.

Later, it said that electricity was restored ahead of schedule at 8pm and no more blackouts were expected.

The first round of outages reduced total output by 3 million kilowatts between 3pm and 3:50pm.

The second round cut output by 3 million kilowatts between 3:50pm and 4:40pm, it said.

Minister of Economic Affairs Wang Mei-hua （王美花） apologized to the nation later yesterday and said that power would be fully restored by 9:40pm.

Idle power generators, including nuclear facilities, were brought online in an attempt to fill the gap left by the Singda outages, Chang said.

“We are working to make sure this is resolved overnight,” he said. “Once we fix the grid, we can bring the Singda generators back online.”

The last major power outage in Taiwan, on Aug. 15, 2017, was caused by a natural gas supply disruption at the Datan Power Plant （大潭電廠） in Taoyuan.

It shut down, eliminating 4.7 million kilowatts of power supply.

Half of Taiwan lost power on a rotational basis for at least three hours, affecting many science parks.

None of science parks in Taiwan reported power interruptions this time, Chang said.

Some of Taiwan Semiconductor Manufacturing Co’s （TSMC, 台積電） facilities reported brief power dips, but the power supply is currently normal, the company said in a statement.

“The electricity is being supplied as normal,” it said. “TSMC has taken emergency response measures and prepared generators to minimize potential impact.”

Operations at ASE Technology Holding Co （日月光投控）, the world’s largest chip packaging and testing services provider, had been affected, the company said in a text message, but the full impact was yet to be determined.