《TAIPEI TIMES》 India deaths top 4,000 as Macron calls on the US to scrap vaccine export limits 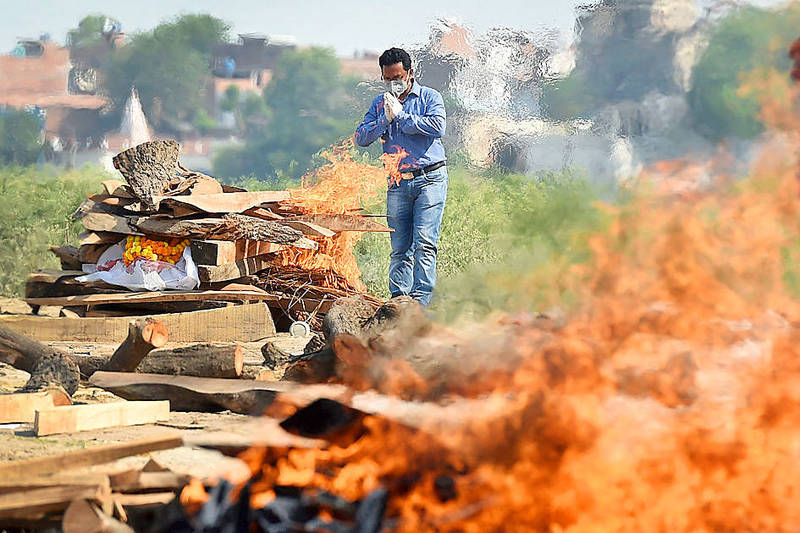 A man offers prayers during the cremation of a relative who died of COVID-19 in Allahabad, India, on Saturday. Photo: AFP

New COVID-19 deaths surged past 4,000 for the first time in India on Saturday in one of the world’s worst outbreaks, as EU pressure mounted on Washington to end vaccine export limits and offer a concrete plan to lift patents.

“I call very clearly on the United States to put an end to export bans not only on vaccines, but on vaccine ingredients, which prevent production,” French President Emmanuel Macron told reporters at an EU summit in Porto.

He was referring to a de facto US ban on the export of vaccine raw materials.

German Chancellor Angela Merkel said the EU had exported much of its own production and the US should follow suit.

“I do not think that a patent waiver is the solution to make more vaccines available to more people,” she said in Berlin. “Rather, I think that we need the creativity and the power of innovation of companies — and to me, that includes patent protection.”

Earlier, Pope Francis had focused on his desire to see patent waivers to “allow universal access to the vaccine.”

He called for the temporary suspension of intellectual property rights, condemning the “virus of individualism” that “makes us indifferent to the suffering of others.”

The call for waivers has gained momentum after the US announced surprise support for such a scheme to enable adequate vaccine supplies to fight COVID-19.

In an interview, WHO Chief Scientist Soumya Swaminathan said: “Early signs were missed [in India] until it reached the point at which it was taking off vertically,” meaning “it’s multiplying at a rate at which it’s very difficult to stop.”

As India battles to stem the rising tide, Africa is fretting over a potential knock-on effect regarding vaccine supplies for the continent.

“We are watching in total horror and disbelief what is going on in India and we don’t expect that vaccines will be shipped out of India any time soon,” the director of the Africa Centers for Disease Control and Prevention, Cameroonian virologist John Nkengasong, told an online meetings of African Union health ministers.

An African Vaccine Acquisition Task Team is hoping to acquire vaccines through its program by the end of July, but Nkengasong said he hoped that date could be brought forward.

WHO Director-General Tedros Adhanom Ghebreyesus told the meeting: “What’s happening now in many other parts of the world can happen in our Africa if we let down our guard,” while dubbing the inequitable distribution of vaccines “not just a moral outrage. It’s also economically and epidemiologically self-defeating.”

Earlier on Saturday, Madagascar received its first batch of vaccines through the COVAX global sharing scheme, one of the last African countries to obtain supplies after months of resistance by Madagascar President Andry Rajoelina.

By yesterday, the global pandemic had killed more than 3.28 million people since emerging in China in December 2019, according to Johns Hopkins University.