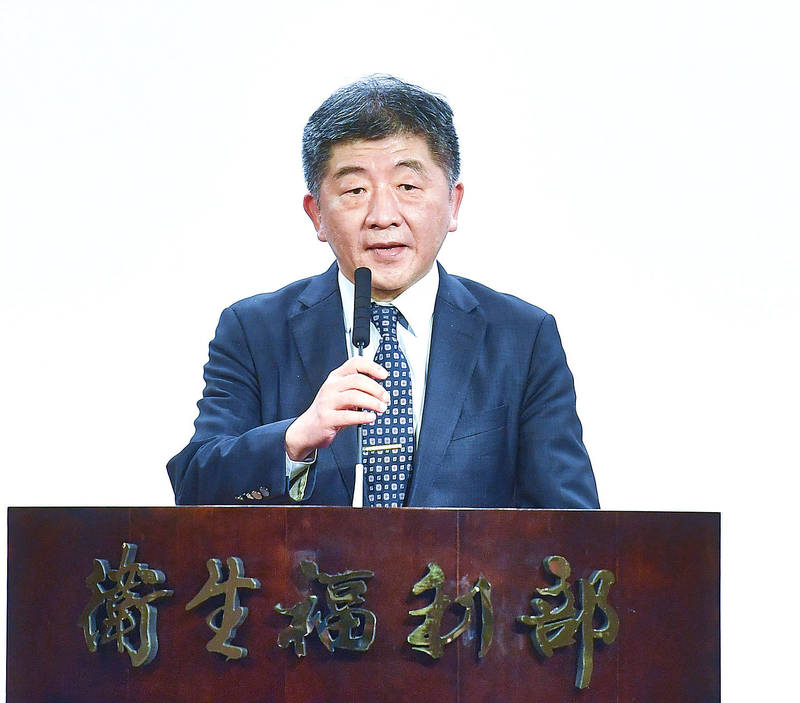 VIRUS CURBS: Visiting people staying at healthcare and long-term care facilities in Taipei, New Taipei City and Taoyuan is banned until May 17, the CECC announced

The Central Epidemic Command Center （CECC） yesterday banned visits to patients or residents at healthcare and long-term care facilities in three cities until May 17. It also reported six imported cases of COVID-19 and two cases with unclear infection sources.

As the number of locally transmitted cases rises, some of whom have visited many places in Taipei, New Taipei City and Taoyuan, enhanced disease prevention measures have to be implemented in the three cities, said Minister of Health and Welfare Chen Shih-chung （陳時中）, who heads the center.

“Visiting people staying at healthcare and long-term care facilities in Taipei, New Taipei City and Taoyuan is banned from today until May 17, with few exceptions allowed,” he said, adding that only one person would be allowed to accompany a hospitalized patient or a care facility resident.

Exceptions to the rule include when a patient has to undergo surgery or invasive therapy and has to be accompanied by a family member, or if the law requires a family member to sign a consent form or other documents.

Another is when the patient is in an emergency room, intensive care unit or hospice unit, and the family has to be told about their condition, or when the patient’s condition has worsened and they need medical treatment or extended hospitalization, and the hospital considers a visit necessary and approves it.

For long-term care facilities, visitors would be allowed if the resident is suffering from symptoms of serious physical and mental discomfort, such as insomnia, unstable blood pressure and irritability, and the facility cannot appease the resident, or other situations in which the facility considers a visit necessary.

People are advised to avoid unnecessary visits to healthcare and long-term care facilities, and are encouraged to call and talk to patients instead, Chen said.

If they have to pay a visit, they should wear a mask, practice good personal hygiene and follow the real-name registration and other hospital rules, he added.

The pilot was tested again on April 25 as part of an expanded testing program of all of the airline’s pilots, after several pilots had earlier tested positive, and his test results came back negative for COVID-19 and antibodies against the virus, he said.

However, on Saturday, the pilot reported having a fever, a cough and a runny nose.

Arrangements were made for him to see a doctor and undergo another COVID-19 test, which came back positive yesterday, with a relatively high viral load, Chen said.

The flight attendant — case No. 1,154 — is a Taiwanese in her 20s, who flew on a flight to the US between April 22 and April 25, and stayed at Novotel Taipei Taoyuan International Airport for quarantine after she returned, Chen said.

She tested negative on Wednesday last week and left the hotel at midnight.

However, as everyone in the hotel was cleared out on Thursday after four employees were diagnosed with COVID-19, the flight attendant was recalled and placed under centralized quarantine in the evening, he said.

On Friday, she tested negative for COVID-19 and antibodies, but on Sunday she had a mild fever, was dizzy and had stomach pains, and her latest test result came back positive yesterday, with a high viral load, he said.

The two had close contact in the early hours of Thursday, as the pilot picked up the flight attendant at the hotel, and they visited Homies Soft Bar in Taipei’s Songshan District （松山） together, Chen said, adding that further investigation is needed to verify whether the flight attendant’s infection is linked to that of the pilot.

Among them was a Taiwanese in his 50s who returned from Thailand on Sunday and, according to news reports on Monday, was confirmed by Thailand’s health authority to have COVID-19.

The man took a polymerase chain reaction test in Thailand, but instead of waiting for the result, presented a fake report to board the plane to Taiwan, Chen said.

He had a fever when he arrived in Taiwan, and was taken to a hospital and tested, with the result returning positive yesterday, Chen said.

The 28 passengers who were seated close to him on the same flight have been placed under home isolation, he added.

Whether the man intentionally concealed his condition is unclear, but the legal affairs division is looking into potential forgery and breaching rules on providing a negative test result before returning to Taiwan, he said.