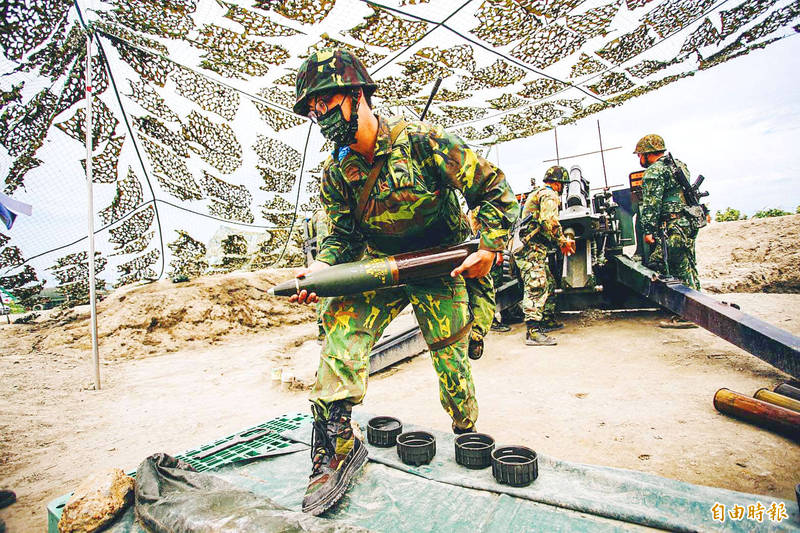 RESTRUCTURING: The All-out Defense Mobilization Office and the Armed Forces Reserve Command are to be folded into a ‘defense reserve mobilization agency’

The military is to form a new reserve mobilization agency while expanding the scope of civilian forces that can be mobilized as part of its efforts to bolster the nation’s reserve forces amid increasing threats from China, the Ministry of National Defense said yesterday.

The ministry made the announcement in a report it sent to lawmakers for review.

The ministry would integrate two existing military agencies — the All-out Defense Mobilization Office and the Armed Forces Reserve Command — into a “defense reserve mobilization agency” by January next year, the report said.

The structural change is part of a military reform to make Taiwan’s reserve forces a more reliable backup for regular soldiers in defending the nation, it said.

Chu Sen-tsuen （朱森村） of the All-out Defense Mobilization Office said the military is also working with the Ministry of the Interior in the hope of amending the Civilian Defense Act （民防法） to expand the scope of civilian forces and volunteers the military can call upon during peacetime and war.

The act forms the legal basis for the defense ministry to mobilize civilian forces.

It defines volunteers the defense ministry can mobilize in case of need as volunteer police officers and volunteer firefighters.

The defense ministry hopes the scope can be expanded to include volunteer workers at Buddhist and Taoist temples, as well as churches, to give the military access to extra personnel, Chu said.

Temple and church volunteers have for decades played an important role in offering post-disaster relief, including preparing food and shelter after major natural disasters or emergencies, Chu added.

The defense ministry in February said that starting next year, it would introduce new rules governing the call-up of reservists to improve their combat readiness.

Under the new policy, reservists would undergo two weeks of training rather than the current five to seven days, and could be called up every year instead of the current once every two years.

The new policy is to begin as a limited trial from next year to 2023 before full-scale implementation in 2024.

The military has also extended the period during which reservists can be called up from four times in eight years after being discharged from military service to four times in 12 years, starting this year.