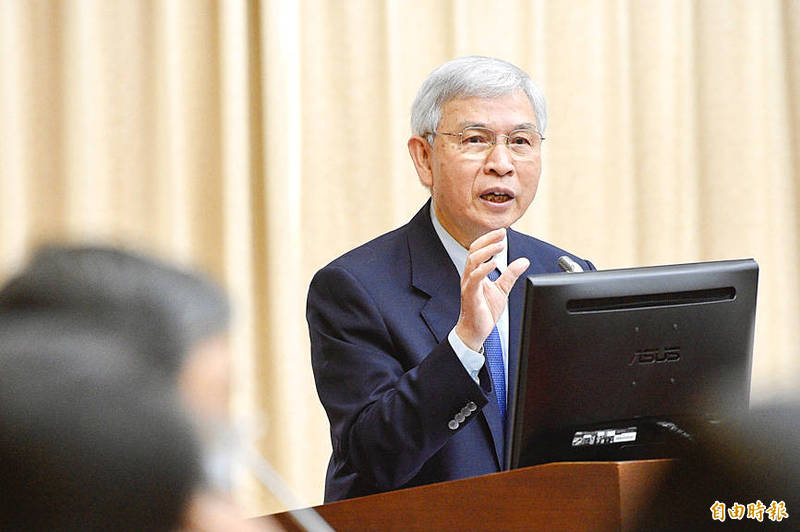 INFLATION RISKS: The bank has no intention of hiking rates for the time being, but it cannot commit to a rate freeze, central bank governor Yang Chin-long said

Central bank Governor Yang Chin-long （楊金龍） yesterday declined to commit to an interest rate freeze for the next two years, unlike the bank’s major global peers, saying the bank has to factor in inflation risks and other economic data when setting policy.

Yang’s remarks came as inflationary pressures build up around the world amid an improving global economy and continued monetary easing.

“The central bank has no intention of raising interest rates for the time being, but cannot promise to maintain the same policy stance for the next two years,” Yang told a meeting of the legislature’s Finance Committee in Taipei.

The central bank would consider interest rate hikes if inflation becomes uncontrollable, Yang said, adding that related readings are benign for the time being.

The consumer price index last month increased 1.26 percent, higher than the 1.2 percent alert level, while the wholesale price index rose 4.36 percent, ending nearly two years of decline, due to a 32.81 percent spike in crude oil prices from a year earlier, the Directorate-General of Budget, Accounting and Statistics said on April 8.

Yang yesterday said he shared the US Federal Reserve’s observation that it is better to leave policy rates unchanged until inflation persistently stays above alarm levels.

Fed Chairman Jerome Powell has said that the Fed would not hike rates until recovery in the US labor market is achieved, and inflation reaches 2 percent and stays on track to run moderately above that level for some time, adding that these are unlikely to happen before next year.

However, he voiced concern that rate hikes could attract global capital and destabilize the local currency, given Taiwan’s small and open economy.

Government agencies, such as the Ministry of Economic Affairs, can help by guiding private funds to industrial investments, and other policymakers can help channel money to overseas investment tools, he said.

He said he would not rule out further credit controls to cool the property market, as housing prices, transaction volume and real-estate lending continue to grow, despite tightening measures.

Yang said he would consider capping LTV ratios at 50 percent for individual second-home owners, who have so far been spared from tightening measures.