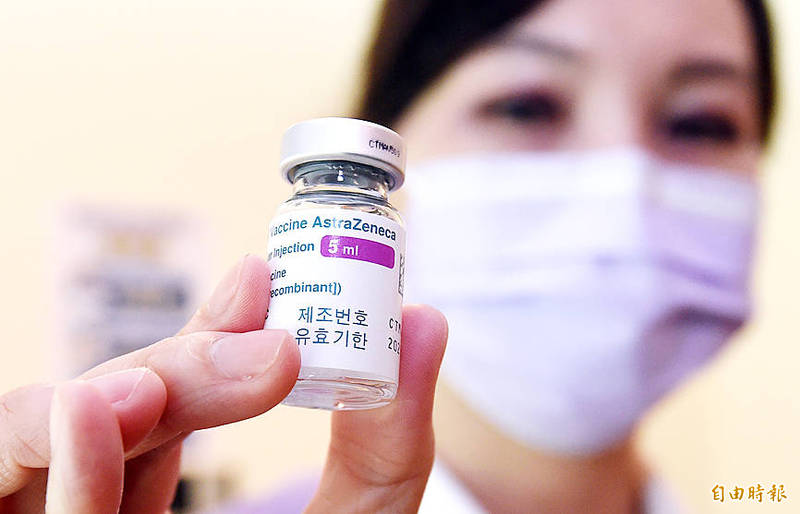 A nurse holds a vial of the AstraZeneca COVID-19 vaccine in Taipei on March 22. Photo: Liao Chen-huei, Taipei Times

APPOINTMENT NEEDED: Officials need to discuss the timing, cost and vaccine locations, and would reveal the details next week at the soonest, Chen Shih-chung said

The Central Epidemic Command Center （CECC） yesterday said it plans to release 10,000 doses of COVID-19 vaccine for people to get vaccinated at their own expense. It also said that 10 local government heads would be vaccinated tomorrow.

There would be eligibility requirements for people to get vaccinated out-of-pocket, such as a need to travel abroad to study, said Minister of Health and Welfare Chen Shih-chung （陳時中）, who heads the CECC.

Chen made the announcement on the sidelines the Asia-Pacific Social Innovation Summit.

The center is planning to release part of the AstraZeneca vaccines in its stock for people to get vaccinated at their own expense, but the timing, cost, vaccination locations and other details need to be further discussed, he said, adding that an official announcement would be made next week at the soonest.

“Our goal is to release 10,000 doses... Our current plan is for them [people] to get vaccinated at hospitals where the vaccine is being offered now,” Chen said when asked how many doses would be made available and where.

Asked if Taiwanese businesspeople in China could apply to get vaccinated at their own expense, Chen said: “The quarantine rules in China are relatively tight, so getting vaccinated or not does not matter too much, but if they express such a demand, we would consider including them.”

Centers for Disease Control Deputy Director-General Chuang Jen-hsiang （莊人祥）, who is the CECC’s spokesperson, said people would need to make an appointment to get vaccinated so that hospitals can make arrangements in advance, as each multidose vial of the AstraZeneca vaccine contains 10 doses.

As eligibility for government-funded vaccines is to be expanded to include second and third priority groups tomorrow, Chuang said: “We have received information that 10 local government heads will get vaccinated on Monday [tomorrow], so the center wants to express its gratitude to them.”

He said 2,577 people received a COVID-19 shot on Friday, the highest daily reported number since vaccinations started, while a total of 24,450 people have so far received the first dose of AstraZeneca’s two-shot vaccine.

The CECC yesterday reported two new imported cases of COVID-19 — an Indonesian fisherman and a Philippine migrant worker who are both in their 20s.