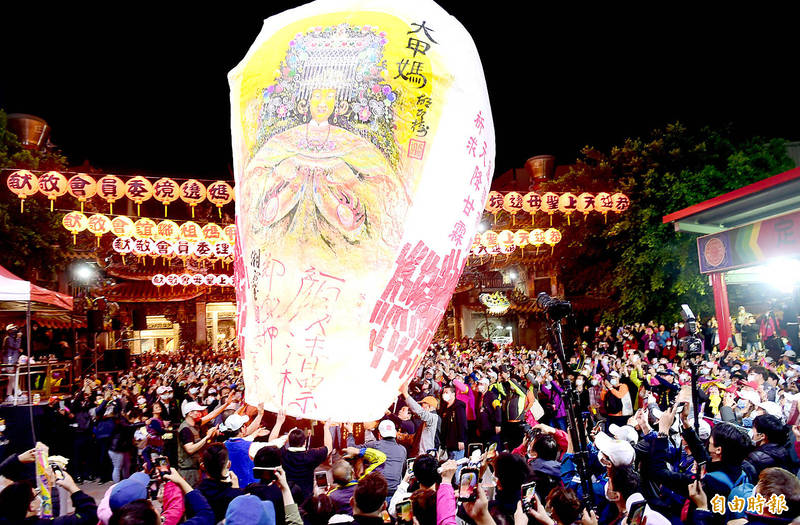 The nine-day pilgrimage — the largest religious event in Taiwan — passes through Changhua, Yunlin and Chiayi counties, before returning to the temple.

The procession in the past few years attracted hundreds of thousands of participants, with the exception of last year, when the event was scaled down due to concerns over COVID-19.

After preliminary activities were completed yesterday, temple personnel carrying three effigies of the sea goddess Matsu in sedan chairs embarked on the journey at 11:05pm.

The radio station, in collaboration with the temple and the General Association of Chinese Taoism, livestreamed the activities on the 17live platform starting at 8pm.

They were available in Taiwan, Singapore, Japan, Indonesia, the US, Russia, Vietnam, Australia, Thailand, Canada, the UK, South Korea and Saudi Arabia.

Radio Taiwan International chairwoman Lu Ping （路平） on Wednesday said many believe that “Matsu has the power to calm, comfort and heal,” adding that she hopes to connect Taiwan with the world through this unique religious event.

The pigrimage would be broadcast until it crosses the Dajia River Bridge （大甲橋）, where fireworks were to be set off at midnight last night, the station said.

Worshipers are this year not allowed to kneel along the road while waiting for the sedan chairs to pass, the temple said, citing COVID-19 prevention measures.

The practice is believed to bring good luck.

Worshipers who wish to enter a temple along the procession route would have to register, the temple said.

Visitors to Jenn Lann Temple in Taichung’s Dajia Township yesterday pray ahead of the start of a nine-day pilgrimage. Photo: CNA