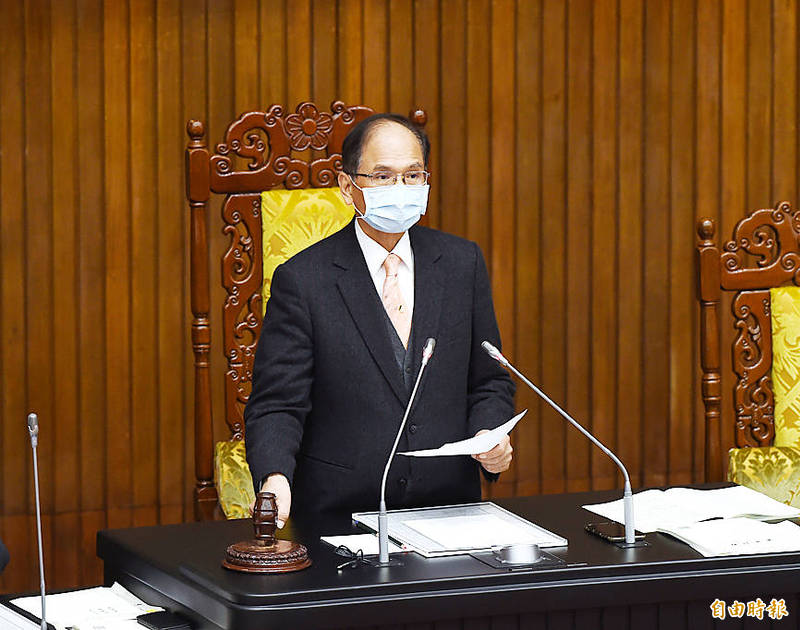 Legislative Speaker You Si-kun bangs his gavel in the legislature in Taipei yesterday after the legislature approved amendments to the Income Tax Act. Photo: Fang Pin-chao, Taipei Times

REACHING BACK: The changes, aimed at preventing individuals from creating entities to avoid capital gains taxes, would apply retroactively to transactions dating to 2016

The Legislative Yuan yesterday approved amendments to the Income Tax Act （所得稅法） that are on July 1 to place a 45 percent capital gains tax on individuals and businesses selling real estate within two years of purchase.

The bill, intended to curb real-estate speculation, was passed after legislators in interparty negotiations on Wednesday resolved areas of disagreement, including setting July 1 for the changes to take effect.

The revisions are aimed at improving the “integrated house and land transaction income tax,” which was introduced in 2016 to reduce speculation, especially in the residential housing market, but has failed to act as a deterrent amid high liquidity and low interest rates.

Businesses pay an across-the-board rate of 20 percent on such gains under corporate income tax rules.

By imposing the same tax rate on individuals and businesses, the bill aims to prevent individuals from setting up companies to trade property and pay only 20 percent on their gains.

For people and companies buying property from outside Taiwan, the 45 percent tax would apply to gains on property sales within two years of purchase, up from one year, after which the rate would remain at a flat 35 percent, according to the bill.

The tax on individuals for gains on properties sold five to 10 years after purchase would be 20 percent, and 15 percent thereafter.

For companies, the rate would return to 20 percent after five years.

The revisions also widen the scope of properties to which the tax applies. While the tax previously only applied to transactions of existing residential properties not considered to be for “self-use,” under the amended version it would apply to the sale of presale homes, above-ground use of land rights and special shareholdings.

The measures would apply retroactively to transactions dating back to 2016.

Ahead of the bill’s passage, Chinese Nationalist Party （KMT） Legislator and Finance Committee convener Tseng Ming-chung （曾銘宗） said his party had several other proposals in the pipeline to increase access to housing, including raising taxes on owners of multiple residential properties and increasing transparency in the rental market.