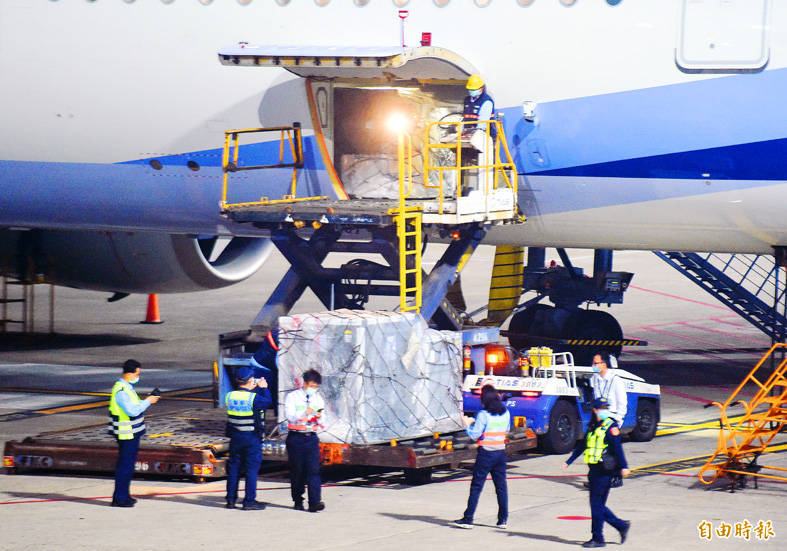 IN A HURRY: The 199,200 doses of AstraZeneca vaccine expire on May 31, so the CECC might expand vaccine eligibility, but distribution would begin in a week at the earliest

The first batch of COVID-19 vaccines allocated to Taiwan through the COVAX global vaccine-sharing program arrived yesterday, the Food and Drug Administration （FDA） said, adding that, after testing, it would be able to distribute them by Monday next week at the earliest.

The 199,200 doses of the AstraZeneca vaccine were shipped from Amsterdam on a China Airlines （中華航空） plane and arrived at Taiwan Taoyuan International Airport at 5:21am.

After the cargo was examined and release procedures were completed at the airport, the Aviation Police Bureau escorted the vehicles carrying the vaccines to a cold chain storage facility.

Centers for Disease Control Deputy Director-General Chuang Jen-hsiang （莊人祥）, the Central Epidemic Command Center’s （CECC） spokesperson, said that the batch would expire on May 31, while the AstraZeneca vaccine currently being administered expires on June 15, so the center might consider expanding vaccination eligibility.

Taiwan has so far received 316,200 doses of the AstraZeneca vaccine, as the first batch that arrived last month comprised 117,000 doses.

The FDA said that it would have to complete a document review and seven types of tests on the new batch of vaccines before releasing them for distribution.

Chuang said that as vaccine recipients are required to receive a second dose of the AstraZeneca vaccine at least eight weeks after the first, the center is leaning toward administering the 199,200 doses of vaccine as a first dose only, in hopes that they would be used up before they expire.

Meanwhile, Taiwan yesterday reported two imported cases of COVID-19: a Taiwanese man who returned on a medical charter flight and an Indonesian student.

The Taiwanese man is in his 60s, works in the Philippines and tested positive for COVID-19 last week after he had a fever on March 23, and also experienced shortness of breath and loss of taste on Monday and Tuesday last week, Chuang said.

The man boarded a medical charter flight on Friday and was hospitalized and tested after arriving in Taiwan on Saturday, he said.

His test for COVID-19 came back positive yesterday, Chuang said, adding that he has pneumonia and is receiving oxygen through a nasal catheter, but does not need a ventilator or extracorporeal membrane oxygenation.

The Indonesian student is in his 20s, arrived in Taiwan on Wednesday, and experienced a fever, runny nose and headache on Friday at a centralized quarantine facility, he said.

The 14 passengers who sat close to him on the flight to Taiwan have been placed under home isolation, Chuang added.