《TAIPEI TIMES》 Tsai visits victims of crash, vows to give them support 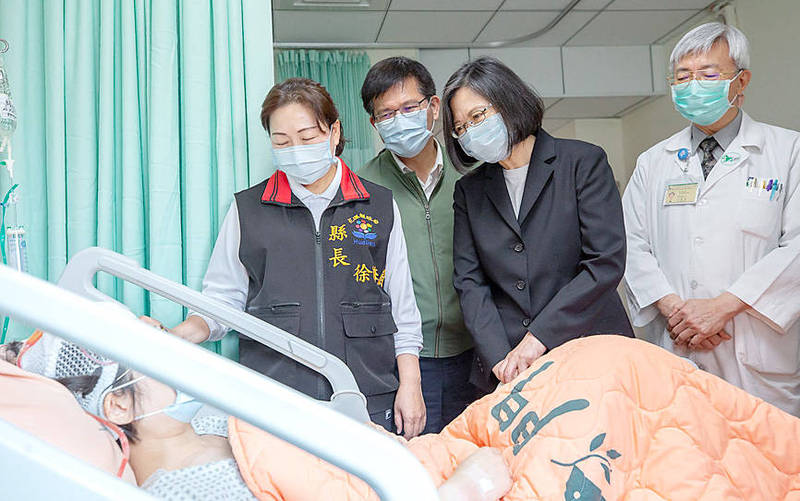 President Tsai Ing-wen （蔡英文） and other officials yesterday visited people injured in the Taroko Express No. 408 train crash, as well as the families of those who died in the accident.

The government is to provide support for the victims and their families, they said.

Tsai, joined by Minister of Transportation and Communications Lin Chia-lung （林佳龍） and Minister of Health and Welfare Chen Shih-chung （陳時中）, also visited a funeral home in Hualien City, where services were being held for the deceased.

The derailment — the nation’s worst railway accident in more than four decades — has killed 51 people and injured 188, as of 7pm yesterday.

Authorities on Friday said that a French national was among those killed, while an Australian and two Japanese had minor injuries.

The Ministry of Foreign Affairs yesterday said that two Americans had also died.

The ministry was already in touch with representatives from the victims’ countries and the government would provide assistance, Tsai said.

Tsai thanked the rescue workers, as well as members of the public who helped with rescue efforts.

Government buildings are to keep flags at half-mast for three days to honor the victims, she said.

US Department of State principal deputy spokesperson Jalina Porter told a media briefing yesterday that the US was “deeply saddened by the loss of life and casualties” in the crash.

“We extend our deepest condolences to all those affected and stand ready to offer all possible assistance... We wish Taiwan peace and comfort during this difficult time,” she said.

“I was deeply grieved when I received news of the accident. I wholeheartedly pray for the deceased to find happiness in the afterlife, and offer sincere condolences to the injured,” he wrote.

China Central Television yesterday quoted Chinese President Xi Jinping （習近平） as saying he was “deeply concerned” for the victims of the accident.

Separately, Chinese Nationalist Party （KMT） Chairman Johnny Chiang （江啟臣） yesterday wrote a response on Facebook to a statement from Lin, in which he said he would not resign over the incident, but would take “political responsibility.”

“I hope the government knows what political responsibility means. The transportation ministry and other officials must work their hardest to ensure people are safe when they travel,” he wrote.

“After all, nobody’s resignation can make up for 50 lost lives,” he added.

After rescue efforts are finished, the KMT will discuss with the Taiwan Railways Administration about how to make travel safer on its network, he said.

It could improve management of construction access roads along its routes, and supervise those who are entering areas near tracks, he wrote.

Chiang said he asked the director of the KMT’s Hualien County chapter, Chang Chun （張峻）, to assist the victims and their families, and has asked Hualien County Commissioner Hsu Chen-wei （徐榛蔚） if Hsu needed any assistance.

A Japanese flag flies at half-mast yesterday at the Japanese representative to Taiwan’s residence in the Yangminshan area of Taipei, in mourning for the victims of Friday’s train crash in Hualien County’s Sioulin Township. Photo: Wang Yi-sung, Taipei Times