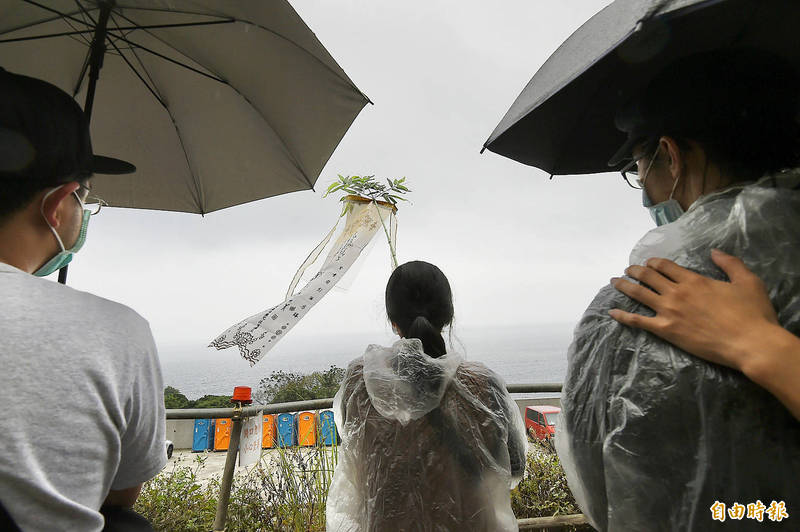 Relatives of people who died in Friday’s train crash in Hualien County’s Sioulin Township participate in a traditional “soul-summoning” ceremony yesterday near the scene of the crash. Photo: Tu Chien-jung, Taipei Times

SOLE SURVIVOR: An Amis family of four purchased standing tickets on the train after missing an earlier one to Hualien. Three died in Friday’s crash

A somber mood yesterday pervaded the crash site of Taroko Express No. 408, as families of those killed in the incident performed a “soul summoning” （招魂儀式）, a traditional Taiwanese folk ritual to call for the deceased soul to return home.

The crash occurred at 9:28am on Friday when the train, which had departed from New Taipei City’s Shulin Railway Station for Taitung, slammed into a crane truck at the entrance of the Cingshuei Tunnel （清水隧道） in Hualien’s Sioulin Township （秀林）.

As of 7pm yesterday, 51 fatalities had been reported, the Taiwan Railways Administration said.

Many grieving family members wept aloud and some needed help to walk during the ritual, as they said: “Come back home” into the dark tunnel, where bodies were being recovered.

Authorities have set up temporary memorial service tables at the site to assist the families for the “soul summoning,” which was led by Taoist monks.

They burned joss paper and prayed for the return of the souls of the deceased.

As the monks read out the names of the dead, family members called out to their loved ones.

Some of the bodies have not yet been identified.

Investigators are collecting DNA samples, as Hualien County prosecutors said they would finish identifying the remains in the next few days.

Among the victims were two young sisters surnamed Yang （楊） from New Taipei City, who rode the train with their father. The youngest, age 6, died.

Doctors attempted to revive her for more than 40 minutes at a hospital, before her father asked to hold her one last time, hospital staff said.

The elder sister, age 9, remains in serious condition due to a fractured skull and brain injuries, which doctors said could result in speech impairment.

She was in an intensive care unit yesterday after undergoing brain surgery on Friday.

The father also sustained injuries and was recovering in hospital.

The dead included three people in a family of four, who had taken the train after missing an earlier one to Hualien.

The sole survivor, Chung Hui-mei （鍾惠美）, said she had only minor injuries to her forehead and arm when the train derailed at the entrance of the tunnel.

The Amis family from New Taipei City was traveling to Hualien to visit relatives for the Tomb Sweeping Day holiday, and had purchased standing tickets after missing their first train, Chung said.

The family was traveling in the first carriage, which was directly behind the engine and was among the worst damaged when the train struck the truck near the tunnel, she said.

The train sounded its whistle as it approached the tunnel, but was traveling at a high speed and did not appear to have slowed down, she said.

Moments later, the train crashed into the wall of the tunnel, sending people flying out of their seats and crumpling the first carriage, she said.

When she found her bearings, Chung located her husband and son under a pile of suitcases and metal debris, but they showed no signs of life, she said.

She then heard her daughter call to her, but when Chung tried to move the debris to get to her, two other young people began crying out in pain and they begged her to stop, as the movement was hurting them, Chung said.

《TAIPEI TIMES》 US troops should be based in…