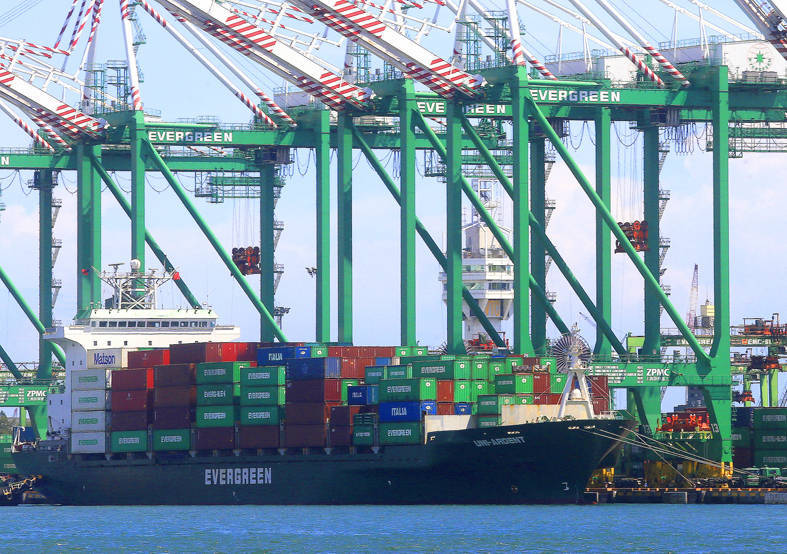 An Evergreen cargo ship is moored in a port in an undated photograph. Photo: CNA

BUCKING THE TREND: With global imports and exports shrinking due to the COVID-19 pandemic, Taiwanese tech firms benefited from a surge in demand for devices

Taiwan ranked 15th in the world by export value last year at US$345.21 billion, gaining two places from a year earlier amid its strongest performance in 16 years, the Ministry of Finance said on Thursday, citing WTO data.

The improvement came after exports grew 4.9 percent annually and imports rose 0.3 percent, bucking the world’s more than 7 percent decline in exports and imports, the ministry said.

Global exports were US$17.6 trillion and imports were US$17.8 trillion, shrinking 7.6 percent to the weakest in four years, as many parts of the world locked down amid the COVID-19 pandemic, which also hampered trade flows.

Taiwanese tech firms benefitted from the surge in demand for laptops, tablets, TVs and other devices used in remote working and schooling, as well as for emerging technologies such as 5G smartphones, artificial intelligence and Internet of Things applications, the ministry said.

Taiwan accounted for 2 percent of the world’s overall exports and 1.6 percent of its imports, it said.

China topped the survey in exports and finished second in imports behind the US, as it has maintained a manufacturing edge and created added value, the ministry said.

China has since 2009 replaced Germany and the US as the world’s largest exporter, making up 14.7 percent of global outbound shipments last year, it said.

Germany was third in exports, followed by the Netherlands, Japan, Hong Kong and South Korea, it said.

The US is the world’s largest importer and second-largest exporter.

The pandemic affected the rankings, as economies that more effectively controlled the virus gained headway, the ministry said.

That could explain why Taiwan and Hong Kong moved up, while Spain and Russia saw their ranking sliding.

Taiwan brought COVID-19 largely under control in May last year, allowing local manufacturers to win order transfers from competitors in other countries.

Germany, Japan, Singapore, South Korea and the US all made smaller contributions to global exports last year.

The outlook remains bright for Taiwan’s exports, as most firms are confident output would increase over the next year, according to a survey released on Thursday by IHS Markit, an international research body.

“Many firms are hopeful the pandemic would come to an end and that customer demand would continue to thrive,” IHS Markit said, adding that the degree of optimism was at a near seven-year high.