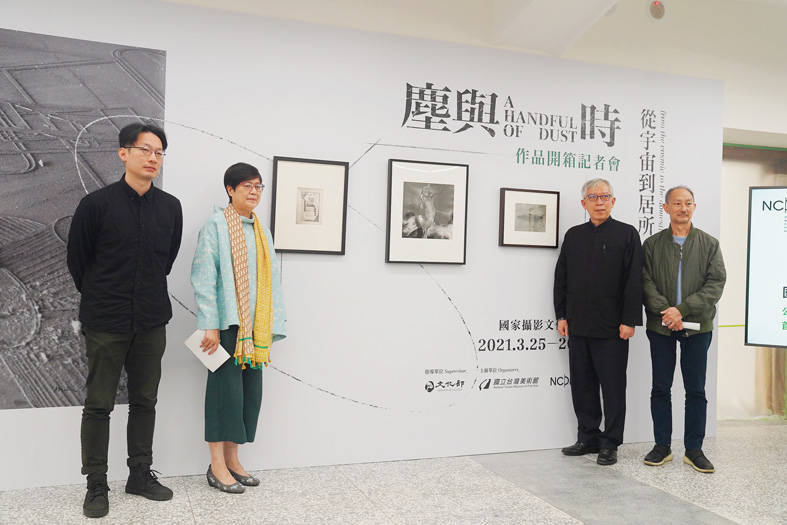 The National Center of Photography and Images, Taipei is planning a soft opening later this month, the center said yesterday at a ceremony to unveil six pieces to be featured in its inaugural international exhibition.

After an inspection by the Taipei City Government, the center is expected to hold a soft opening on March 25 at 70 Zhongxiao W Rd Sec 1 in Zhongzheng District （中正）.

During the preview period, which runs until April 18, visitors would be required to make appointments online, it said.

Following an opening ceremony on April 19, the center is to officially open to the public the next day, it said.

Liang Yung-fei （梁永斐）, director of the Taichung-based National Taiwan Museum of Fine Arts, yesterday announced the dates and presented six works for the center’s first international exhibition, “A Handful of Dust: From the Cosmic to the Domestic” （塵與時：從宇宙到居所）.

The museum was tasked with running the center by the Ministry of Culture.

The National Center of Photography and Images, Taipei is the first national center dedicated to the research, collection, display and promotion of photography and video art, Liang said.

There are already more than 11,000 items in its collection, he added.

The exhibtion was curated by David Campany, who is the managing director of programs at the International Center of Photography in New York, Liang said.

The exhibition explores the intricate relationship between photography and art over the past century, and reflects on how various metaphors involving dust are expressed in photography and visual art, it said.

The other two works were Implosions of Buildings 65 and 69, Kodak Park, Rochester, NY and Lens Cleaning by Canadian photographers Robert Burley and Scott McFarland respectively.