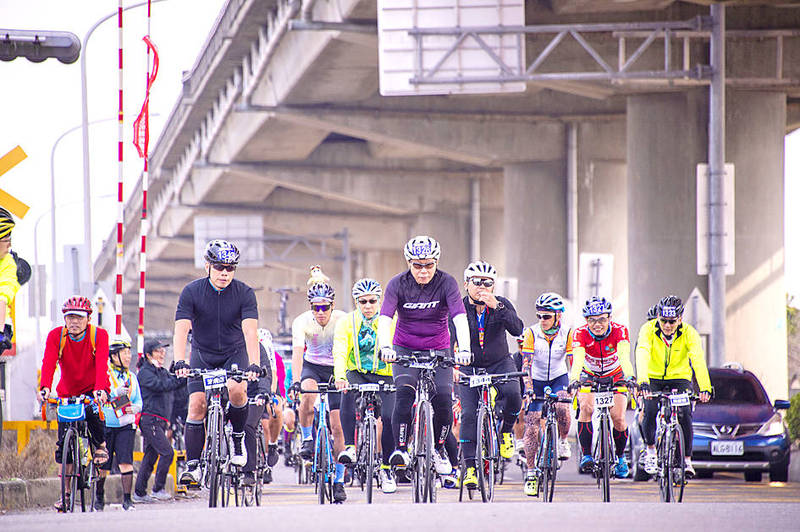 Taipei Mayor Ko Wen-je, front center, is accompanied by other cyclists yesterday on a ride along a Taipei road. Photo courtesy of Taipei City Government

Taipei Mayor Ko Wen-je （柯文哲） early yesterday morning set off on his third one-day cycling trip from Taipei to Kaohsiung, but had to cut the journey short after arriving in Changhua about three hours behind schedule.

On his second run, on Feb. 28, 2019, Ko only rode from Taipei to Hsinchu, returned to Taipei for a ceremony, and later continued the trip from Tainan.

The Taipei Department of Sports said that the city government this year formed a “Team Taipei” relay to complete the challenging one-day, 365.5km Taipei-to-Kaohsiung cycling trip.

The event was held to promote cycling as a recreational activity, as well as to commemorate the 74th anniversary of the 228 Incident, it said.

Ko’s team embarked on the first leg of the journey at 12:50am from Kuandu Temple （關渡宮） in Taipei’s Beitou District （北投）.

They were set to arrive at Baotian Temple （寶天宮） in Changhua County’s Shengang Township （伸港） shortly before 8am, but he arrived much later at about 10:43am.

The planned destination for the first part of the journey was Kouhu Visitor Center （口湖遊客中心） in Yunlin County.

From there, Ko was to return to Taipei by high-speed rail to attend a ceremony to commemorate the 228 Incident in the afternoon, before returning to finish the final leg from Tainan to Kaohsiung in the evening.

However, Ko had to cut short the first part of the trip at Baotian Temple to return to Taipei.

At the temple, Ko said the trip was “really tiring” and he had not trained enough this time, adding that leaving at almost 1am felt like he had been performing a surgery throughout the night without any sleep.

After attending a Taipei City Government-organized ceremony at Taipei’s 228 Peace Park （二二八和平公園）, Ko called the Incident a sweeping persecution by the government and state apparatus that caused more than 20,000 deaths.

In the post, he wrote that the 228 Settlement Committee was a “base of operations for calling for insurrection.”

The wording was later changed to say the committee was “hoping to maintain social security through negotiations to deal with the aftermath” of the incident.