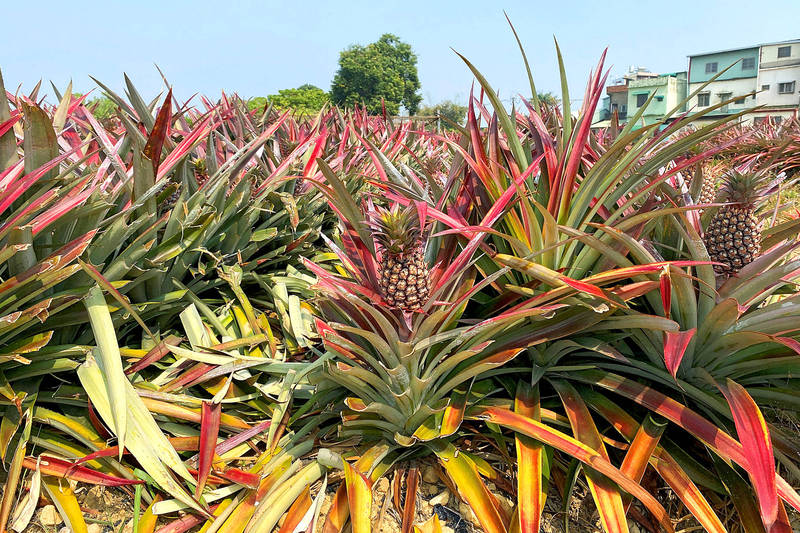 OVERHAUL NEEDED: The government should improve its agricultural processing capabilities and expand to new markets to limit its reliance on China, an expert said

China’s ban on Taiwanese pineapples was “unsurprising,” and Taiwan should have years ago altered its produce export strategies and target customers, experts said.

China on Friday abruptly suspended imports of pineapples from Taiwan, saying that it had on multiple occasions discovered “harmful biological entities” on the fruit.

Calling it an “unfriendly” move, the Council of Agriculture （COA） said that 99.79 percent of the pineapples sent to China since last year have met China’s import standards.

Chiao Chun （焦鈞）, the author of Fruits and Politics — A Recollection of Cross-strait Agricultural Interaction Over the Past Decade （水果政治學：兩岸農業交流十年回顧與展望）, said that China’s announcement is clearly targeting Taiwan, as the Taiwanese pineapple season is from mid-February to June every year.

There might have been other factors, in addition to the deterioration of cross-strait relations since 2016, that led China to make such a decision, he added.

Chiao said that China is no doubt hoping to use produce exports as a bargaining chip should the Democratic Progressive Party （DPP） give in to pressure from farmers.

China is a volatile, high-risk market, as the Chinese government tries to foster dependence on its market, and then uses this reliance to obtain seeds and other technology with the goal of eventually taking over a market segment, especially in produce, Chiao said, adding that this has been a known ploy used for years.

The atemoya, a hybrid of sugar apple and cherimoya, is likely the Chinese government’s next target, Chiao said.

Japan was the second-biggest importer, with 2,160 tonnes, while Hong Kong and Singapore imported 1,186 and 421 tonnes respectively, data showed.

Taiwan could improve its capability to process agricultural products, which would extend the produce’s shelf life, added value and gross profit margin, Hsu said, adding that this would mitigate a reliance on refrigeration for fresh produce.

However, the COA would first need to be in charge of produce production and processing, as the latter is under the jurisdiction of the Ministry of Economic Affairs, he said.

National Feng Chia University Department of International Business professor Yang Min-hsien （楊明憲） said that China should not target Taiwanese farmers if it wished to extend an olive branch to Taiwan.