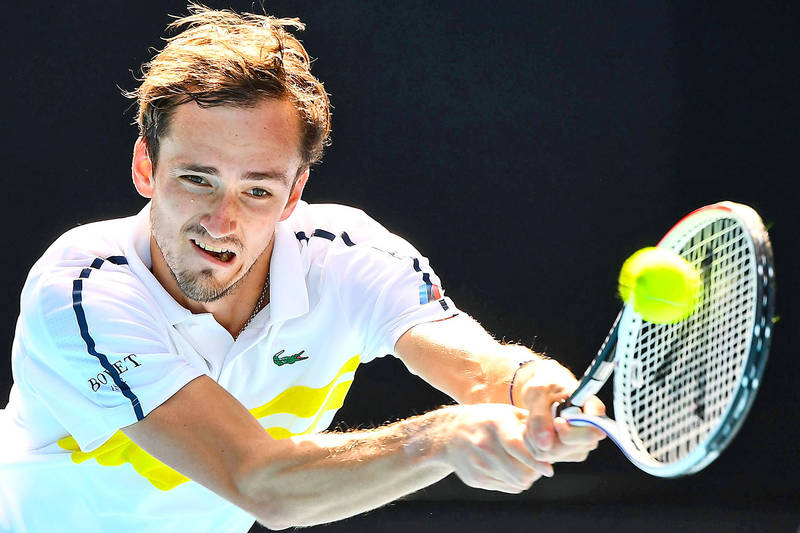 MAKING HISTORY? Hsieh can concentrate on today’s singles match, where a win would make her the oldest debut Grand Slam quarter-finalist in the Open era

Taiwan’s Hsieh Su-wei yesterday fell to a shock defeat in the second round of the women’s doubles at the Australian Open, while in the men’s singles, Russia’s Daniil Medvedev finally worked out how to a win a five-setter in Melbourne.

Jurak and Stojanovic converted seven of eight break points and hit 36 winners to stun the Taiwanese-Czech pairing and advance to the third round.

The defeat means Hsieh can concentrate on today’s singles match against 2019 French Open finalist Marketa Vondrousova, where a win would make the 35-year-old the oldest first-time Grand Slam quarter-finalist in the Open era.

“I never made a [Grand Slam] quarter-final, so I don’t think too much,” Hsieh told the Australian Open Web site after ousting 2019 US Open winner Bianca Andreescu in the second round. “I just try my best.”

In the men’s singles, fourth seed Medvedev was 0-6 in career five-setters and his match against 28th seed Filip Krajinovic looked like it was going all the way.

After some angry outbursts from an increasingly animated and chatty Medvedev directed at his box in an otherwise empty Rod Laver Arena — fans have been banned as a COVID-19 precaution — his coach, Gilles Cervara, got up and left.

Medvedev had been bothered by a problem with his upper left leg and left the court with a trainer for a medical timeout late in the fourth set.

While he was falling behind in that set, Medvedev yelled after dropping a point: “Unbelievable. This is unbelievable.”

When he fell behind 5-2 in the fourth, Medvedev shouted: “I never saw something like this.”

He returned to better much play in the deciding set, smacking an inside-out forehand winner to a corner to close an 18-stroke exchange and break to go up 2-0.

He did not drop another game as he seized the momentum back from Krajinovic, who was previously 4-1 in matches that went the full five sets.

“In contrary with previous matches where I could get tight ... here I was really calm to finish the match,” Medvedev said. “Really happy I got the five-set win.”

The victory stretched Medvedev’s winning streak to 17 matches, including his successful run to the title at last year’s season-ending ATP Finals and with Russia last week at the ATP Cup.

Medvedev, the US Open finalist last year, next plays Mackenzie McDonald, the unseeded American who beat Lloyd Harris in straight sets to equal his best Grand Slam result by reaching the round-of-16.

There were no fans in the stands due to the start of a five-day lockdown imposed by the Victoria state government in response to a COVID-19 outbreak at a quarantine hotel.

Up to 30,000 spectators daily — 50 percent of capacity — had been admitted on previous days.

Andrey Rublev had a 7-5, 6-2, 6-3 win over 39-year-old Feliciano Lopez and stayed on course for an all-Russia quarter-final clash against Medvedev.

Rublev and Medevedev both went unbeaten in the 12-team ATP Cup. Seventh seed Rublev, who is to meet Casper Ruud of Norway in the fourth round, won an ATP Tour-high five titles last year and, with a 41-10 win-loss record, finished the year equal with Novak Djokovic for most wins.

Fifth seed Stefanos Tsitsipas beat Mikael Ymer of Sweden 6-4, 6-1, 6-1 in a much more straightforward outing than his five-set marathon against Thanasi Kokkinakis in the second round.