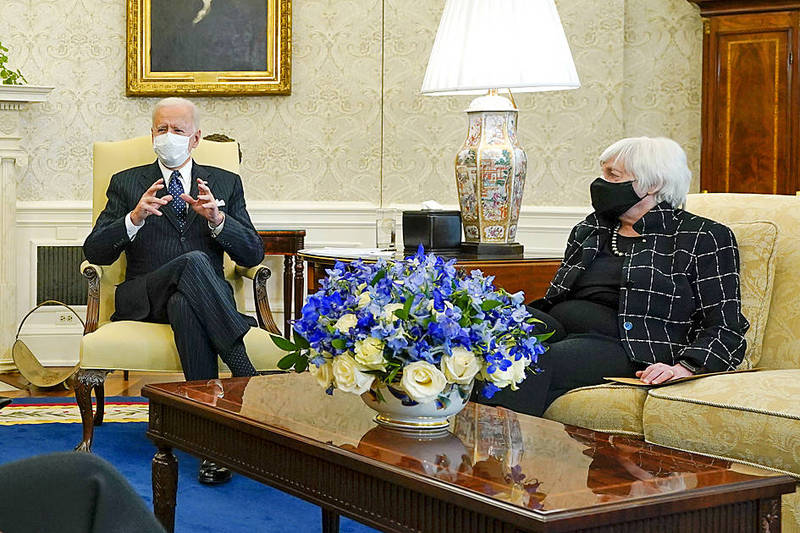 ‘TIME IS NOW’: Janet Yellen said in an online call with G7 officials there is a new tone out of Washington: deepening international engagement and strengthening alliances

US Treasury Secretary Janet Yellen stressed the need for the G7 countries to “go big” with fiscal stimulus to support economic recovery from the global pandemic.

In her first call with foreign counterparts and central bankers from the G7, Yellen said that “the time to go big is now” and that the group should focus on how to help the economy, the US Treasury Department said in a statement after the virtual meeting held on Friday.

The online gathering of finance chiefs from the world’s top industrial economies addressed a proposed expansion in the IMF’s lending firepower along with digital taxation and climate change.

The US is leaning toward backing an increase in the IMF’s special drawing rights, or SDRs, by as much as US$500 billion, Bloomberg News reported earlier this month. The fund has been lobbying for more help to support developing nations against the COVID-19 crisis.

The G7 discussed increasing the IMF’s resources during Friday’s call, and the group expects a decision to be announced later this month on the back of a G20 discussion, according to one person familiar with the matter. The finance ministers’ goal in Friday’s talks was to build momentum around helping developing nations, the person said on the condition of anonymity.

UK Chancellor of the Exchequer Rishi Sunak, who hosted the virtual meeting, also stressed the importance of the G7 “shaping support for vulnerable countries,” according to a statement from his office.

The US has a de facto veto in the IMF on the decision, and former US Treasury secretary Steven Mnuchin had previously blocked the fund’s requests to boost its special drawing rights.

Yellen highlighted in the call that there is a new tone out of Washington. The US “places a high priority on deepening our international engagement and strengthening our alliances,” she said, according to the Treasury’s statement.

On fiscal policy, the US is among the most aggressive, with the Biden administration pursuing a US$1.9 trillion package in Congress. French Finance Minister Bruno Le Maire said the world’s biggest economies must coordinate stimulus plans and policies in an effort to reduce key risks including trade tensions and inequality.

The finance chiefs also discussed the continuing effort to find international consensus on taxing Internet giants such as Facebook Inc.

Japanese Finance Minister Taro Aso told reporters that given how Friday’s talks went there’s an increasing possibility of a compromise on the international taxation issue. US and European officials have shifted their positions in recent months, he said. Aso said he previously thought that getting a conclusion by mid-2021 was almost impossible.

The group will hold another meeting next month, Aso said.

Biden “believes the largest corporations should pay their fair share in taxes,” White House Press Secretary Jen Psaki said on Friday at a briefing. She said Biden is “committed” to reaching a multilateral agreement.

The UK underlined its commitment to progress on the tax challenges of the digital economy, and called on the G7 to work toward reaching an enduring multilateral solution by the deadline of the middle of this year agreed by the G20, the UK Treasury said.

Talks on digital taxation have been held under the rubric of the Paris-based Organisation for Economic Co-operation and Development.

“We have to come to an agreement this summer,” on the matter, Le Maire said, according to the French finance ministry.