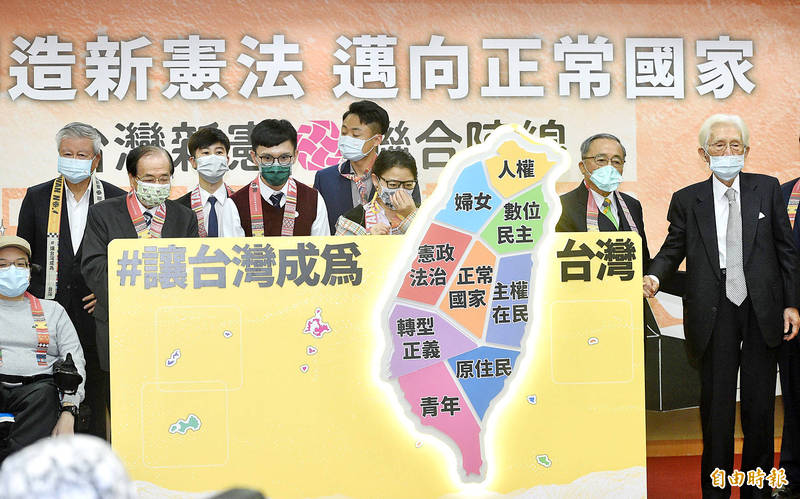 DISPOSING MYTHS: A new constitution would better reflect reality, as the current one was drafted ‘in and for China,’ without the consent of Taiwanese, advocates said

“This is a historic moment for Taiwan. Drafting a new constitution is the most important task Taiwanese face,” veteran independence advocate Koo Kwang-ming （辜寬敏） said at the inaugural event in Taipei.

“Although the Democratic Progressive Party is in power, its authority is based on the Republic of China [ROC] Constitution, which has no connection to Taiwan,” said the 95-year-old Koo, a former presidential adviser.

“The historic task of drafting a new constitution depends on efforts by all Taiwanese,” Koo said. “A constitution for a sovereign, independent Taiwan is not just for the benefit of those of us alive today, but also for that of our children and grandchildren.”

“The ROC Constitution was drafted in and for China, by representatives of the Chinese Nationalist Party [KMT],” said Lee Hung-hsi （李鴻禧）, constitutional expert and law professor at National Taiwan University, adding that a new constitution for Taiwan should have been drafted much earlier.

Representatives of the Taiwan New Constitution Foundation, which is chaired by Koo, read out a proclamation on the need for a new constitution, saying: “When provisions in the ROC Constitution are in conflict with the wishes of Taiwanese and their pursuit of happiness, people have the right to a new constitution.”

The ROC Constitution was ratified during a National Constituent Assembly meeting in Nanjing, China, in 1946, they said.

“Taiwanese were not involved in the process of drafting or ratifying it, and were never asked for consent,” they said. “It was imposed on Taiwan, but later was suspended as the KMT placed the nation under martial law.”

“In the decades before Taiwan’s democratization started in the 1990s, Taiwanese were not granted the rights stipulated in the Constitution, such as the freedoms of expression, assembly and the press,” they said.

“Taiwanese only had a minimal say at the local level, while Mainlanders held all relevant positions in the central government, including as lawmakers who were not elected by the public,” they added.

“The ROC Constitution is dead and exists in name only. As the constitution of China, it has been superseded by the People’s Republic of China constitution,” they said.

A new constitution would omit the obsolete provisions in place and better represent the reality of two separate entities on both sides of the Taiwan Strait, they said.

“A new constitution would do away with the myth of a unification with China,” they said. “It would be an expression of the Taiwanese public’s will for self-determination and safeguard their dignity.”