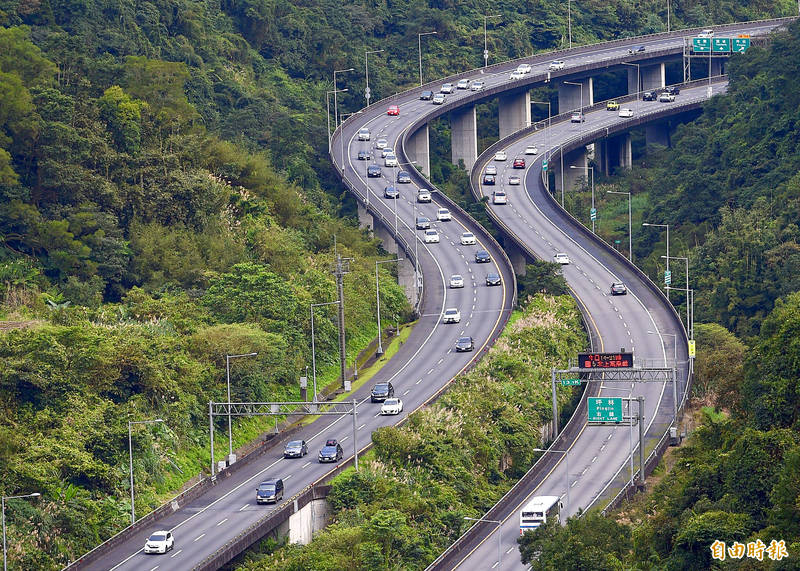 SUMMER TRAVELERS: Freeway toll fee revenue dropped from February to April last year, before recovering in the summer, with traffic volume surging up to 15 percent

Despite the COVID-19 pandemic, the government’s freeway toll fee revenue last year rose by NT$500 million （US$17.56 million） thanks to an increase in the number of road travelers, Freeway Bureau data showed.

The pandemic led to a decrease in freeway traffic volume from February to April last year, on weekdays and holidays, the bureau said.

However, traffic volume began to rise in May and showed positive growth in June, the bureau said.

The swings in toll fee revenue mirrored the fluctuations in freeway traffic volume, the bureau said.

The amount of toll fees collected slid from February to April, with the largest decline of 6.2 percent recorded in April, it said.

By August, revenue had risen 9.5 percent, the bureau said.

The bureau attributed the growth in traffic on Freeway No. 3 to its proximity to mountainous areas and scenic spots, adding that the pandemic motivated people to visit these areas.

In terms of the types of vehicles on freeways, the most significant decline was seen in the traffic caused by medium-sized to large passenger buses, the bureau said.

The largest decline happened in April, when the traffic volume of medium to large buses fell 47 percent on weekdays and 69 percent on weekends and holidays, it said.

The traffic volume of small passenger vehicles also dropped during the first four months of last year, with the decline ranging from 1 to 11 percent, before returning to growth in May, it added.

Business owners at freeway rest areas failed to benefit from the slight increase in freeway traffic volume, with their aggregate revenue falling 3.98 percent to NT$3.97 billion.

The number of freeway travelers frequenting the rest areas fell from 31.54 million to 30.82 million, the bureau said.