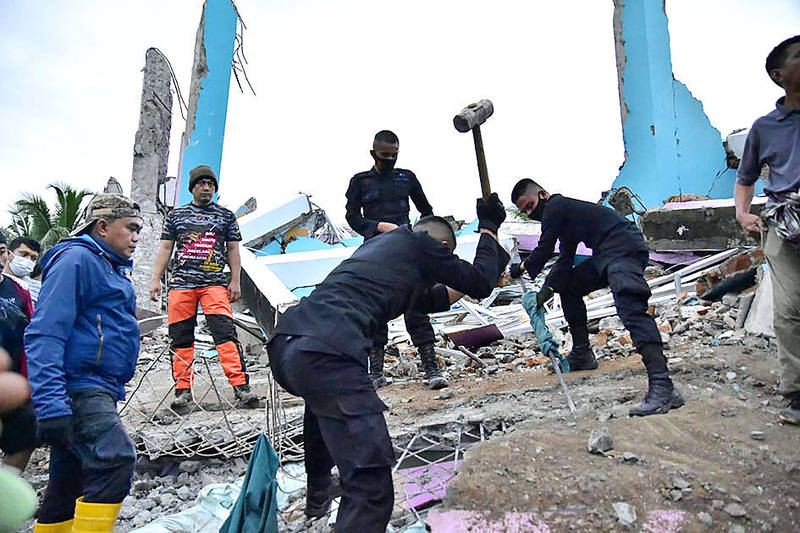 Rescuers search for survivors of an earthquake at the Mitra Manakarra Hospital in Mamuju, Indonesia, yesterday. Photo: AFP

A powerful earthquake yesterday rocked Indonesia’s Sulawesi island, killing at least 37 people, leveling a hospital and severely damaging other buildings, authorities said, as they warned that there were people still trapped beneath rubble.

Hundreds were also injured when the magnitude 6.2 earthquake struck in the early hours, triggering panic among the residents of the island, which was hit by a huge earthquake and tsunami two-and-a-half years ago that killed thousands.

So far, 29 bodies have been hauled from beneath crumpled buildings in Mamuju, a city of about 110,000 in West Sulawesi province, while another eight were killed south of the area.

“We don’t know how many more are missing,” said Arianto of the rescue agency in Mamuju. “There are still people trapped beneath the rubble.”

Rescuers were searching for more than a dozen patients and staff trapped under a leveled Mamuju hospital.

“The hospital is flattened — it collapsed,” said Arianto, who like many Indonesians goes by one name.

Earlier yesterday, rescuers said they were also trying to reach a family of eight who were under their destroyed home.

At least one hotel had partially collapsed, while the regional governor’s office was also extensively damaged after the earthquake struck at 2:18am local time.

Images from the scene showed residents trying to flee the seaside city in cars and motorbikes, as they drove past corrugated metal roofs and other building debris scattered on the roadside.

However, landslides triggered by heavy rains and the earthquake blocked the main access road out of Mamuju.

The meteorological agency warned residents that the area could be hit by strong aftershocks and to avoid the beachfront in case of a tsunami.

Taiwan is willing to provide humanitarian assistance to the victims of the earthquake, the Presidential Office said.

President Tsai Ing-wen （蔡英文） has instructed the Ministry of Foreign Affairs to express her government’s sympathies and concerns to the victims and their families, Presidential Office spokesman Xavier Chang （張惇涵） said.

In a separate statement, the ministry said that Department of East Asian and Pacific Affairs Director General Larry Tseng （曾瑞利） had called Indonesia’s top envoy in Taiwan, Budi Santoso, to express Taiwan’s sympathies to those affected by the earthquake.

No Taiwanese were reported to have been hurt in the earthquake, the ministry said, citing information from the representative office in the Southeast Asian country.

Taiwan’s offices in the capital, Jakarta, and Surabaya would continue to monitor the situation and provide any necessary assistance to Taiwanese in Sulawesi, the ministry said.

Indonesian rescuers carry a person out of a collapsed building following a magnitude 6.2 earthquake in Mamuju, Indonesia, yesterday. Photo: EPA-EFE