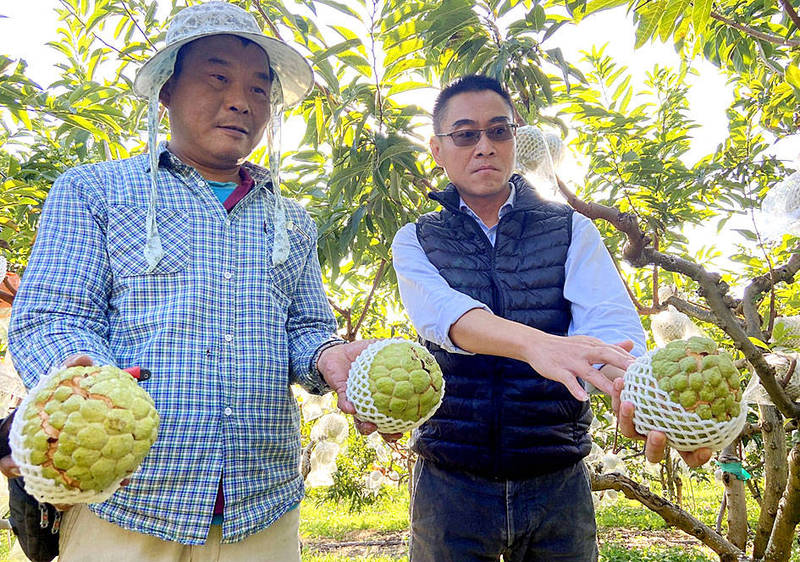 Two men in Taitung County yesterday hold up custard apples that have split open due to the cold weather. Photo provided by a member of the public via CNA

A strong cold air mass is expected to send temperatures plummeting across the country from today to Monday, the Central Weather Bureau （CWB） said yesterday.

The bureau has issued cold warnings — temperatures dropping below 10°C — for most areas of central and southern Taiwan over the three-day period.

Hsinchu, Miaoli, Taichung, Changhua, Nantou, Yunlin and Chiayi counties, as well as Tainan and Kaohsiung, are likely to be the worst-affected areas, it said.

Northern and eastern Taiwan could experience rain showers over the weekend, while most other areas are likely to see cloudy to clear skies, the bureau said.

Starting on Tuesday, the cold air mass could ease, with temperatures rising 1°C to 3°C across the nation, it said.

However, another weather front is expected later in the week, bringing more rain to the nation, forecasters said.

On Thursday, the Council of Agriculture said that the cold spell caused an estimated NT$118.14 million （US$4.15 million） of agricultural losses nationwide.

The most heavily damaged crop was wax apples, which accounted for more than NT$70 million of the losses, the council said, citing data from Dec. 30 last year to Thursday.

The council said that 657 hectares of crops were damaged.

Pingtung County was the hardest hit, with NT$66 million in agricultural damage, or 56 percent of the national total, the council said.