《TAIPEI TIMES》 Taiwan in Time: The six Braves left behind 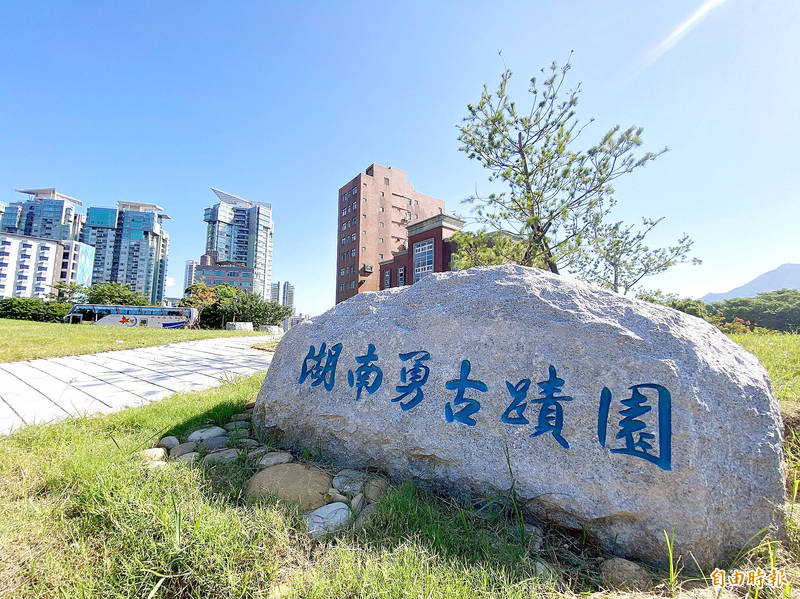 The entrance to the Hunan Brave Historic Park, which will officially open on Tuesday. Photo: Chen Hsin-yu, Taipei Times

The Hunan Braves fought in Taiwan against Aborigines and the invading French, leaving behind six tombstones in Tamsui that will be part of a historic park slated to open on Tuesday

The Hunan Braves （湖南勇） are famous for their ferocity in combat. It’s said that while defending Taiwan against the French during the 1884 Battle of Tamsui, they would rush back to the battlefield immediately after having their wounds treated.

The combined forces of Qing Dynasty troops, irregular warriors like the Braves as well as local resistance fighters eventually fended off the French in a shocking victory.

The Hunan Braves, who belonged to the Zhuosheng Battalion （擢勝營） under Qing Dynasty general Sun Kai-hua （孫開華）, himself a native of Hunan, were no strangers to Taiwan.

They first arrived in 1876 to support the Qing’s “open up the mountains and pacify the savages” （開山撫番） campaign, setting up camp in Keelung and heading down the east coast to help crush Aboriginal resistances in Yilan and Hualien.

After a brief return to China, they arrived again in 1879 as the Qing came into conflict with Japan over the Ryukyu Islands, and became embroiled in a border dispute with the Russians in Xinjiang. They didn’t see action on this trip, spending their time fortifying defenses in Tamsui and Keelung before heading back to China. At least six Braves didn’t make the return trip, dying in Taiwan between August and November 1881 for unknown reasons.

Their modest graves have survived, and the surrounding grounds have been renovated and transformed into the Hunan Braves Historic Park （湖南勇古蹟園）, which will hold its grand opening on Tuesday.

The writing on the six graves is roughly etched using a blunt knife, probably done hastily as a temporary marker so they could one day be reburied in their homeland. However, that never happened for unknown reasons, according to their entry on the National Cultural Heritage Database.

The writing is rough with the characters varying in size, and experts speculate that the same person, likely a more educated Brave, carved all the tombstones. Usually, the bottom left of the tombstone shows the person’s descendants, but in this case it displayed their province and county of origin. They were likely low-ranking fighters because the graves showed no titles or posthumous names.

These Braves were irregular troops that the Qing temporarily recruited to quell rebellions and carry out other missions. According to an extensive study on the tombstones by architect Yang Jen-chiang （楊仁江）, the Braves gained prominence in the Qing military system as its regular Eight Banners and Green Standard Army declined in strength and morale. These Braves found great success on the battlefield and became organized into the Hsiang Army （from Hunan Province） and Huai Army （from Anhui Province） during the Taiping Rebellion.

The Zhuosheng Battalion was formed by General Sun, who made a name for himself during the Taiping Rebellion that ended in 1864. The battalion was formed in response to Japan’s 1874 military expedition to Taiwan to punish Paiwan Aborigines for killing shipwrecked Ryukyuan sailors in 1871.

The Qing wanted to shore up Taiwan’s defenses, and asked Sun, who was brigadier general in Zhangzhou, to recruit men from his home province and station them in neighboring Xiamen. Although some sources state that the battalion was made up of Fujian natives, Yang writes that it’s unlikely that a Hunanese general would recruit Fujianese troops due to dialectal differences and trust issues.

The battalion had five divisions, which typically have 505 members each — making for a total of an estimated 2,525 warriors.

In 1876, the Zhuosheng Battalion made its first expedition across the Taiwan Strait. They first saw action the following year against Amis Aborigines during the Dagangkou incident （大港口事件） at today’s Makotaay village in Fengbin Township （豐濱）, Hualien County.

The incident broke out in response to the Qing’s attempt to build a road through the area, and allegedly ended with Taiwan commander Wu Kuang-liang （吳光亮） tricking the Aborigines into attending a banquet and massacring them when they got drunk.

In June 1878, the battalion aided Qing troops during the Kaliawan Incident, which involved the Kavalan and Sakizaya Aborigines. This was the event that caused the surviving Sakizaya to conceal their identities and hide among the Amis. The Sakizaya remained classified as Amis until 2007.

The battalion soon headed back to Fujian, but in the fall of 1879 it landed in Keelung once more to relieve troop shortages. Several months earlier, the Japanese officially annexed the Ryukyu Kingdom, which was previously a tributary state to the Qing — and the Qing were concerned they might turn their head toward Taiwan.

Sun returned to Hunan to recruit more troops in 1880. This fresh batch arrived that winter and formed the battalion’s middle and left divisions, which included the six Braves whom the gravestones belonged to, Yang writes. They died while building reinforcements in Tamsui, possibly due to one of the many diseases that ravaged the area, but one cannot say for sure.

The battalion returned to China shortly afterward as about 2,000 Braves from Yunnan arrived to take their place, leaving the six graves behind. But they would soon be summoned back for a fourth and final time: to defend Tamsui against the French invasion of 1884, when they would leave their mark in Taiwanese history with a surprise victory.

During the Qing Dynasty, irregular troops wore uniforms with the Chinese character for brave instead of soldier. Photo courtesy of Wikimedia Commons

One of the Hunan Brave tombstones in Tamsui. Photo courtesy of Wikimedia Commons

During their second stint in Taiwan, the Hunan Braves fortified defenses in the Tamsui area such as the Hobe Fort. Photo courtesy of Wikimedia Commons

A battle reenaction in Tamsui. Photo courtesy of Wikimedia Commons

A strategic map by the French of the Battle of Tamsui. Photo courtesy of Wikimedia Commons