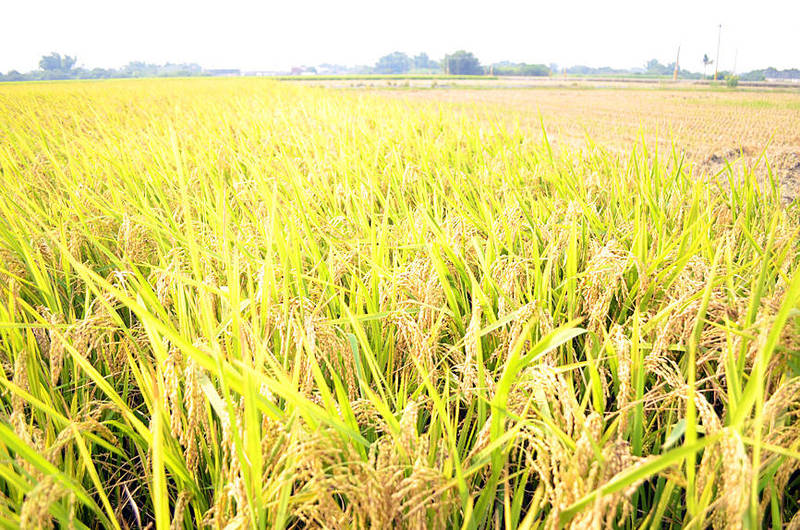 Rice grows in a field in the Chianan Plain of Chiayi and Tainan yesterday. Photo: CNA

As Taiwan enters a “historically difficult” dry season, more water use restrictions are on the way, while irrigation on the Chianan Plain （嘉南平原）, which spans Chiayi and Tainan, would be halted, meaning there would be no first-harvest rice from “Taiwan’s rice barn” next year, the Ministry of Economic Affairs said yesterday.

A total of 18,000 hectares of agricultural land would be affected by the suspension of irrigation, including 10,000 hectares for water-intensive rice paddies, the ministry said.

Next month’s rainfall would determine whether areas in Taoyuan and Taichung would face a similar suspension of irrigation for the first harvest, the ministry said.

At the third meeting focusing on the water situation at the Central Emergency Operation Center yesterday, the ministry said that the northeast monsoon and the peripheries of a typhoon this month helped, but most of the precipitation fell in the northeast and did not help fill reservoirs in the nation’s west, which are running low, a statement released after the meeting said.

“The chance of sufficient rain to relieve the shortage by the end of next month is slim, and due to La Nina, we are likely to see less precipitation from February to April,” the statement said, citing Central Weather Bureau forecasts.

In addition to irrigation restrictions, industrial water users at business parks have been told to reduce water usage by 7 percent, up from the 5 percent previously requested.

Areas on “yellow alert” for low water reserves — Taoyuan, Hsinchu, Miaoli, Taichung, Chiayi and Tainan — are to have their water pressure lowered for eight hours overnight, up from six hours.

The ministry had “no choice” but to halt irrigation in Chiayi and Tainan, Minister of Economic Affairs Wang Mei-hua （王美花） said.

“It is not a matter of not wishing to share the pain with farmers, but even if we used all the water in the reservoirs for irrigation, it still would not be enough,” Wang said.

The Zengwen （曾文） and Wushantou （烏山頭） reservoirs are only 30 percent full, holding about 107 million tonnes between them, while 203 million tonnes would be required to irrigate the areas, the ministry said.

Similar restrictions for Taoyuan, Hsinchu, Miaoli and Taichung look increasingly likely, the ministry said, adding that the suspension of irrigation would be the last resort.

Wang said that water for use in daily life is “not in jeopardy,” despite the shortages, while farmers would be “compensated after conferring with the Council of Agriculture.”