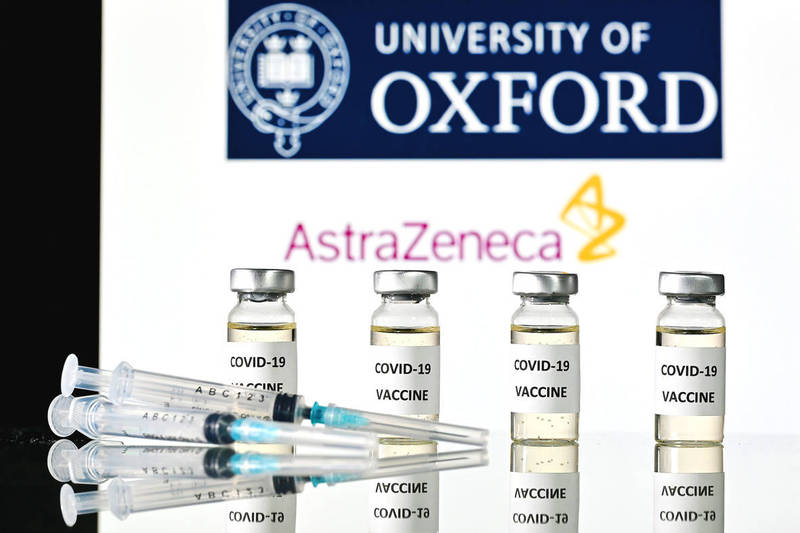 A promotional image shows vaccine vials and syringes with the University of Oxford and AstraZeneca logos on Tuesday. Photo: AFP

LOW RISK: A member of the Central Epidemic Command Center’s specialist advisory panel said that children have a lower risk of infection, serious complications or dying

Children are less likely to have priority in getting vaccinated against COVID-19, Lee Ping-ing （李秉穎）, a member of the Central Epidemic Command Center’s （CECC） specialist advisory panel, said yesterday.

Lee, a physician in National Taiwan University Hospital’s division of pediatric infectious diseases, made the remark on the sidelines of a conference on the effects of COVID-19 on children’s health in Taipei.

Clinical trials of COVID-19 vaccine candidates have not included children, he said, adding that statistical data suggests that children do not have a higher risk of infection and that the risks of them developing serious complications or dying are also relatively low.

When effective vaccines become available in Taiwan, children are unlikely to be at the front of the vaccination line, Lee said.

The mRNA vaccines are easier and faster to mass produce, but they present higher risks of systemic or local adverse events, and require ultra-low temperatures for storage and transport, Lee said.

The vaccines based on adenoviral vectors are considered relatively safe, but they have not been widely administered as a commercial vaccine, he said, adding that the vaccine might be less effective in people who already have antibodies that neutralize adenoviruses, and it is not suitable for people with weakened immune systems.

The recombinant-protein-based vaccines are thought to be the safest and most efficient, but they are more difficult to produce quickly, Lee said.

On Friday, Centers for Disease Control Deputy Director-General Chuang Jen-hsiang （莊人祥）, the CECC’s spokesperson, said that Taiwan can buy the vaccine that Oxford University is developing with British drugmaker AstraZeneca through the COVAX allocation platform.

Foreign media have reported that the vaccine shows an “encouraging” immune response in older adults, and that 99 percent of those given the vaccine in a mid-term clinical trial developed antibodies.

Asked if Taiwan can buy the vaccine, Chuang said that the center has started negotiations to acquire it in August and September next year, but he declined to provide further details.

Taiwan can buy the vaccine through COVAX, he said, adding that the government has also contacted the manufacturer regarding issues such as quantity and timing.

The Oxford-AstraZeneca vaccine is expected to be cheaper than the one developed by Pfizer in collaboration with BioNTech, and easier to ship, as it can be stored at 2°C to 8°C, Chuang said.

The Pfizer vaccine, an mRNA vaccine, must be stored at ultra-low temperatures — as low as minus-80°C.

The CECC has budgeted NT$11.5 billion （US$399.03 million） for the purchase of 30 million doses of a COVID-19 vaccine, which would be enough to vaccinate 15 million people, Chuang said.