《TAIPEI TIMES》 Ministry thanks lawmakers in the US 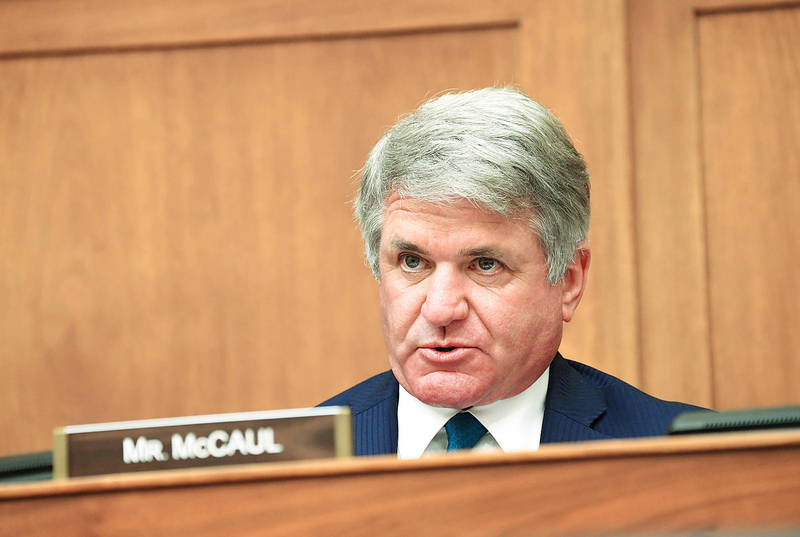 US Representative Michael McCaul, a ranking member of the House Foreign Affairs Committee, speaks on Capitol Hill in Washington on Sept. 16. Photo: AFP

TRADE RECOMMENDATION: A Congress task force said that Taiwan is a ‘bona fide’ democracy, a ‘de facto’ sovereign nation and critical in global opposition to the CCP

The Ministry of Foreign Affairs yesterday thanked US lawmakers after a congressional task force published a report suggesting that the US government initiate trade negotiations with Taiwan and pass legislation to boost bilateral relations as soon as possible.

Taiwan would continue efforts to deepen ties with the US, the ministry said, after the US House of Representatives’ China Task Force on Wednesday published a report that highlighted threats that Beijing poses to the US.

“Taiwan is a bona fide democracy and a de facto sovereign nation, and US security ally,” the report said. “Taiwan is a critical focal point in the free world’s confrontation with the CCP [Chinese Communist Party], and under a more direct threat of CCP armed aggression than any other US partner.”

“The [US] administration should allow Taiwan to change the name of its diplomatic office to the ‘Taiwan Representative Office’ or a similar title,” it said. “Taiwan’s primary diplomatic organization inside the US is currently called the ‘Taipei Economic and Cultural Representative Office,’ an anachronistic title that does not reflect the fact that the US enjoys broad, substantial relations with all of Taiwan, not just its capital city.”

The US Congress should “support Taiwan’s acquisition of asymmetric capabilities for self-defense and the implementation of its Overall Defense Concept,” and continue to approve sales of arms to it as part of efforts to fulfill long-term US security commitments, it said.

The administration should “deepen our trade ties with Taiwan and resolve specific outstanding trade issues so the administration can take steps to launch trade agreement negotiations once those issues are addressed,” it said.

The US Congress should pass the Taiwan Symbols of Sovereignty Act, the Taiwan Fellowship Act and the Taiwan Non-Discrimination Act, as well as ensure final passage of the Taiwan Assurance Act, it said.

Ministry spokeswoman Joanne Ou （歐江安） yesterday thanked the US lawmakers for their calls for the US government to take concrete action to deepen bilateral ties.

The ministry would communicate with US administrative agencies and US representatives to advance the friendship, Ou said.

The task force, established by 15 Republicans this year, is chaired by US Representative Michael McCaul.

The report also touched upon topics such as sanctions against Chinese telecommunications companies allegedly engaged in economic or industrial espionage in the US, evaluations of Beijing’s crackdown on Uighur Muslims in Xinjiang and whether the oppression constitutes genocide, and the origins of the COVID-19 pandemic, as well as Beijing’s failures to contain the novel coronavirus in its early stages.