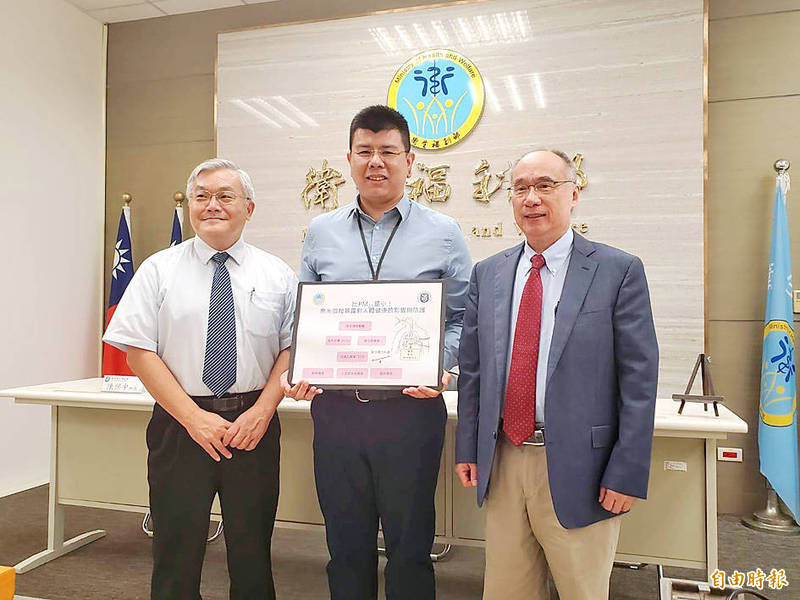 DANGER: Workers exposed to nanoparticles can experience oxidative stress, which can cause cell injury and increase a person’s risk of cardiovascular or lung damage

A panel study by National Health Research Institutes （NHRI） researchers has found that long-term exposure to nanoparticles can cause oxidative stress, which can lead to cell damage and inflammation.

The research team led by investigator Liou Saou-hsing （劉紹興）, who has since passed away, and principal investigator Wu Wei-te （吳威德）, of the NHRI’s National Institute of Environmental Health Sciences, conducted a four-year follow-up study to understand the health effects that handling engineered nanomaterials has on workers.

At the Ministry of Health and Welfare in Taipei yesterday, Wu said many people have heard of PM2.5 — particulate matter smaller than 2.5 micrometers — but nanoparticles are much finer, with a diameter of less than 0.1 micrometers, with a wide spectrum of applications.

Nanotechnology applications include electronic materials, health products, textiles, sports equipment, household products, sanitary ware and even food products, he said, adding that the wide use of nanomaterials has led to a rapid increase in the number of workers exposed to engineered nanoparticles.

Studies on mice have shown that the effects of inhaling engineered nanoparticles include pulmonary fibrosis, inflammation, granuloma, cardiovascular issues, oxidative stress, pleural plaque formation and lung cancer, as well as mesothelioma-like effects, but there were no long-term studies of the health effects on workers, Wu said.

The team examined biomarkers in 206 workers who handled nanomaterials and 108 unexposed workers in a control group from 14 nanotechnology plants, and collected blood, urine and exhaled breath condensate specimens five times several months apart throughout the four years, he said.

The study found that long-term exposure to nanoparticles can cause oxidative stress, which is an imbalance of free radicals and antioxidants in the body, as the antioxidant enzyme superoxide dismutase was significantly elevated in the workers who handled nanomaterials, Wu said.

Oxidative stress can cause chronic inflammation, leading to a higher risk of cardiovascular or lung damage and cell injury, he said.

However, cardiovascular dysfunction, lung damage, inflammation, oxidative damage, and neurobehavioral and genotoxic markers were not found to be directly associated with handling nanomaterials, he said, adding that direct adverse health effects from long-term exposure to nanoparticles were not found through the study.

However, researchers found that many workers were only wearing activated carbon masks when handling nanomaterials, and the team has suggested that they wear N95 respirators to better protect against nanoparticles, Wu added.