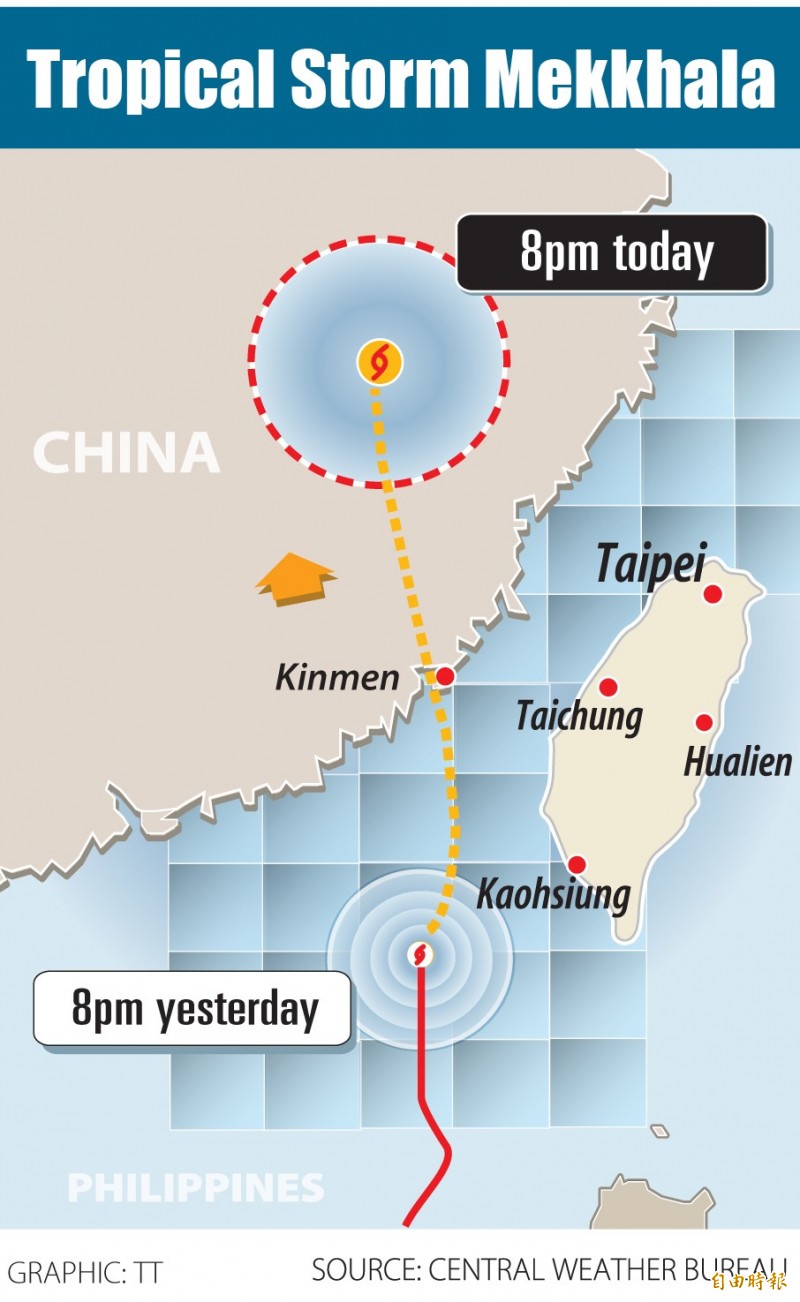 The Central Weather Bureau yesterday issued sea and land alerts for Tropical Storm Mekkhala as it threatens Penghu and Kinmen counties, as well as vessels in the Bashi Channel and Taiwan Strait.

The bureau issued the alert at 10:30am, even before the Japan Meteorological Agency — which is in charge of naming the tropical storms or typhoons in the northwestern Pacific Ocean — assigned the storm a name, as its data indicated that a tropical depression system in the south had become a tropical storm.

The Japanese agency did not name the storm Mekkhala until 11am, the bureau said.

The storm’s center was 230km southwest of Oluanpi （鵝鑾鼻） at 8:30pm, and it was moving north at 21kph, bureau data showed.

The land alert applies to Penghu and Kinmen, whereas the sea alert was issued to vessels operating in the Bashi Channel and Taiwan Strait, as well as those near the north coast of Taiwan proper and the Pratas Islands （Dongsha Islands, 東沙群島）.

Bureau forecaster Lo Ya-yin （羅雅尹） said that Mekkhala was expected to affect the nation from last night until this morning, adding that the wind in Penghu could reach level 10 to 11 on the Beaufort scale, when the storm would come closest to the islands at midnight.

The storm’s center would move very close to Kinmen this morning, Lo said, adding that the bureau does not exclude the possibility of it making landfall there.

“Overall, the storm’s projected path appears to move slightly westward. As such, residents in Penghu and Kinmen should beware of damage caused by strong winds and extremely heavy rainfall brought by the storm,” she said.

The bureau would gradually lift land and sea alerts this afternoon. when the storm is forecast to move away from Taiwan toward China’s Fujian Province, Lo said.

Between last night and this morning, heavy to extremely heavy rain is expected for a short duration in the south and southeast of Taiwan proper, as well as in Penghu and Kinmen, she said, adding that residents in coastal areas should be prepared for strong winds.