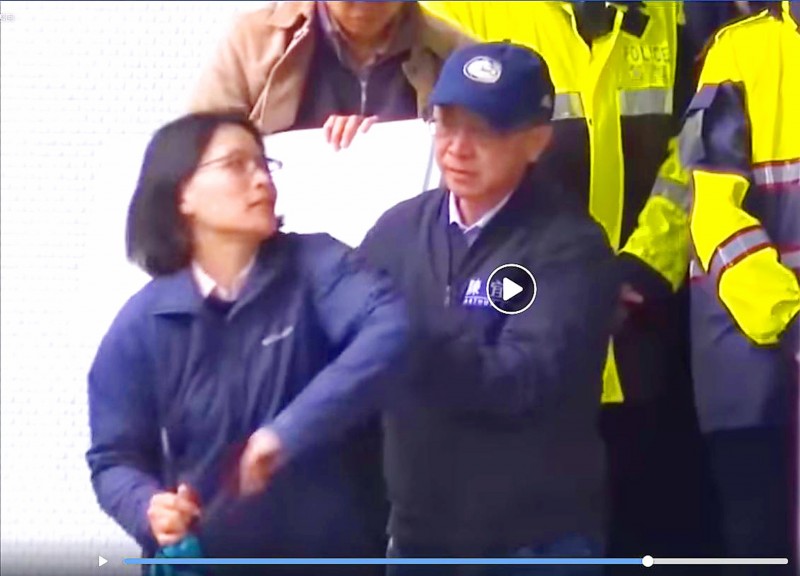 By Cheng Yu-fu and Jake Chung / Staff reporter, with staff writer and CNA

The Democratic Progressive Party （DPP） yesterday released a video that appears to show a Chinese Nationalist Party （KMT） legislator pushing a policewoman at a protest in Taipei the previous day.

A group of 10 to 20 KMT lawmakers and some city councilors on Friday tried to enter the Ministry of Foreign Affairs building to demand that Minister of Foreign Affairs Joseph Wu （吳釗燮） offer an explanation for the suicide last year of Su Chii-cherng （蘇啟誠）, the then-director-general of the Osaka branch of the Taipei Economic and Cultural Office in Japan.

However, police at the main entrance blocked the KMT members and a scuffle ensued.

The footage, shared by DPP Legislator Wang Ting-yu （王定宇）, appears to show KMT Legislator Arthur Chen （陳宜民） asking the policewoman what her unit is and knocking her cap off before pushing her.

KMT legislators William Tseng （曾銘宗） and Lin Te-fu （林德福） appear to physically intimidate a junior official from the ministry’s press room and repeatedly ask him whether he is a National Security Bureau agent.

KMT legislators Lin Yi-hua （林奕華） and Chen Yu-jen （陳玉珍） were caught in the altercation for more than an hour, during which Chen Yu-jen fainted and Lin Yi-hua sustained serious bruises, the KMT said, adding that the two sought medical treatment at National Taiwan University Hospital.

The National Police Agency’s Special Police Sixth Corps on Friday said it would bring charges against Arthur Chen for obstruction of official duty, adding that the officer is a member of the corps.

Arthur Chen later that night said on Facebook that he was “caught up in the moment” and called on the officer to provide video evidence of the altercation.

The KMT said its lawmakers wanted the ministry to show accountability over Su’s death after Yang Hui-ju （楊蕙如）, a former campaign aide to Representative to Japan Frank Hsieh （謝長廷）, was on Tuesday indicted for hiring people to influence public opinion online and attack or deride opponents.

Yang allegedly directed an online campaign to defend Hsieh by accusing Su of dereliction of duty and failing to help Taiwanese stuck at Japan’s Kansai Airport when Typhoon Jebi hit the country on Sept. 4 last year.

The accusations stemmed from a fabricated news story that the Chinese embassy in Japan sent buses to evacuate Chinese stranded at the airport.

Although the report was later proven to be false, it sparked criticism of perceived inaction by the ministry to help Taiwanese stranded at the airport.

The hired Internet users allegedly called Su and other branch personnel “festering remnants of the party-state ruled by the KMT,” and wished death upon them, which Hsieh said might have contributed to Su committing suicide at his residence in Osaka eight days later.