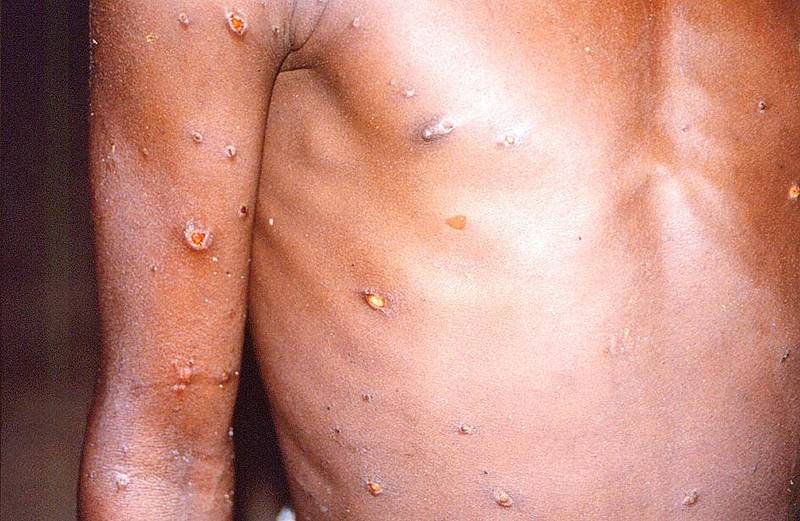 Skin lesions caused by monkeypox cover the arms and torso of a person in an undated image taken during an outbreak of the virus in the Democratic Republic of the Congo from 1996 to 1997. Photo: Reuters

CECC UPDATE: Officials said the definition of a confirmed COVID-19 case has been revised to include those who are positive in a PCR home test confirmed by a doctor

The Central Epidemic Command Center （CECC） yesterday said that it would probably list monkeypox as a category 2 notifiable communicable disease today or tomorrow.

The WHO is to convene an emergency committee meeting today in accordance with the International Health Regulations to discuss whether the spread of monkeypox to 39 countries, including 32 non-endemic countries, constitutes a public health emergency of international concern.

On Tuesday, the Singaporean Ministry of Health confirmed its first imported case of monkeypox, which is also the first case reported in Southeast Asia.

South Korea yesterday reported its first confirmed case of monkeypox — a South Korean national who returned to the country on Tuesday.

Asked if Taiwan would step up its preventive measures against the disease, Centers for Disease Control Deputy Director-General Chuang Jen-hsiang （莊人祥）, who is the CECC’s spokesman, said that health officials are discussing whether to list the viral infection as a notifiable communicable disease and are at the final approval stage.

Monkeypox is likely to be listed as a category 2 notifiable communicable disease and, if approved, the policy would be announced today or tomorrow at the earliest, Chuang said.

A man who last week returned to Taiwan from a trip to Europe had blisters and skin eruptions, but tested negative for monkeypox, Chuang said.

Separately, Chuang said that the definition of a confirmed COVID-19 case has been revised to include people who test positive with an at-home polymerase chain reaction （PCR） nucleic acid test that has been confirmed by a doctor.

Starting yesterday, people who test positive with a Food and Drug Administration-approved at-home PCR test and are confirmed to have the disease by a doctor would be considered a confirmed COVID-19 case, he said.

People who test positive with an at-home rapid antigen test and receive a doctor’s confirmation have been accepted as confirmed cases since May 26, he said.

The sensitivity and specificity of PCR tests are higher than rapid antigen tests, and the revision was made after a review by specialists, Chuang said.

People who test positive with either kind of test should write their name and test date on the test cassette, take a photograph of the cassette alongside their National Health Insurance card, and show it to a doctor during a telemedicine consultation, he said.

They should place the test cassette in a zipper bag if they are to see a doctor in person, Chuang said, adding that they are prohibited from taking public transport and are required to wear a mask throughout the trip.