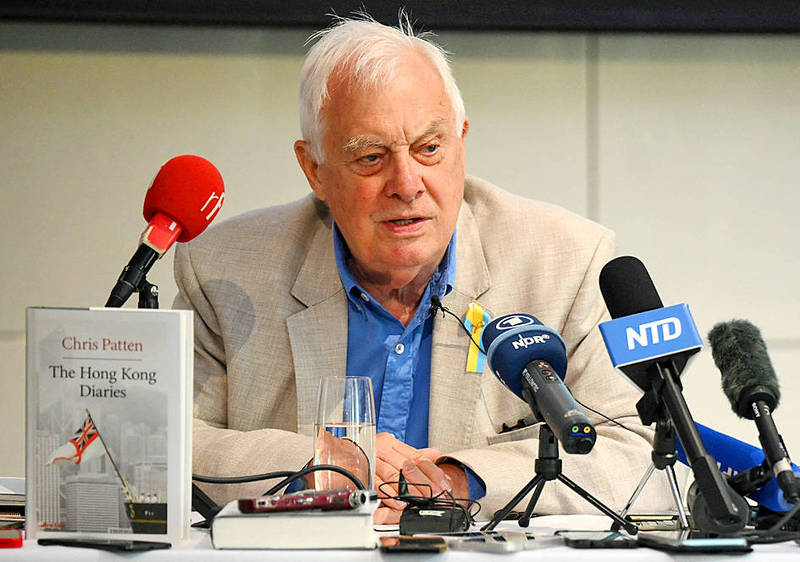 Beijing’s crackdown on civil liberties in Hong Kong has been “a lot worse” than expected, the last British governor of the territory said on Monday as he launched a new book to coincide with the 25th anniversary of the former British colony’s handover to China.

Chris Patten, who led Britain’s last government in Hong Kong before the territory was returned to Chinese rule on July 1, 1997, said it was “heartbreaking” to see its transformation.

“I thought there was a prospect that [China] would keep its word, and I’m sorry that it hasn’t,” Patten said in London.

“I just find it intensely difficult. I do believe that Hong Kong is a great city. I hope it will be a great city again,” he said.

However, he said that he was not too optimistic.

“I’ll believe that things are changing when some of those who’ve gone into exile in the last few years start to want to go back to China, to Hong Kong,” he said. “And that isn’t happening at the moment.”

Hong Kong, Britain’s last significant colony, reverted to Chinese rule in 1997 under a “one country, two systems” principle that was supposed to preserve for 50 years its rule of law and civil liberties — including freedom of speech and assembly — not found elsewhere in China, but Beijing has dramatically intensified its crackdown on dissent in the territory since 2019, when massive pro-democracy demonstrations triggered violent clashes between protesters and police.

Since Beijing imposed a wide-ranging National Security Law in 2020, dissenting media have been shut down and more than 150 people have been arrested on suspicion of offenses including subversion, secession, terrorism and foreign collusion to intervene in the territory’s affairs.

Reflecting on his time in Hong Kong and what happened after the British left, Patten said that “by and large, Hong Kong remained pretty much the same” for a decade after the handover until Chinese President Xi Jinping （習近平） came to power.

“Xi and his goons” were terrified by anti-government protests in Hong Kong, Patten said, adding that he was surprised and distressed by the extent to which Beijing disregarded the Sino-British Joint Declaration, the treaty that set the conditions of Hong Kong’s handover to Chinese rule.

“I’m surprised that Xi Jinping has taken steps which are I think so, so bad for China’s medium and long-term interests, not only in managing the economy, but also in managing China’s soft power around the world ... which is dissipating very rapidly,” Patten said.

Patten described as “ludicrous” how authorities in Hong Kong are reportedly planning to introduce new school textbooks claiming the territory was never a British colony.

He joked that his new book, a collection of his diary entries during his time as governor from 1992 to 1997, showed that “I do exist and I’m not a figment of my imagination.”

“As previous Chinese emperors and dictators have done, you can bury the scholars, but you can’t bury their history,” he said.

Asked about his view on China’s military ambitions over Taiwan and whether that could result in a situation comparable to Russia’s invasion of Ukraine, Patten said he hoped that Xi realizes “what an incredibly dangerous enterprise it would be” to assault Taiwan.

“I guess Xi will look at how the world has reacted to the invasion of Ukraine with some concern, but the fact that we are talking about it right now has made me rather worried,” he said.