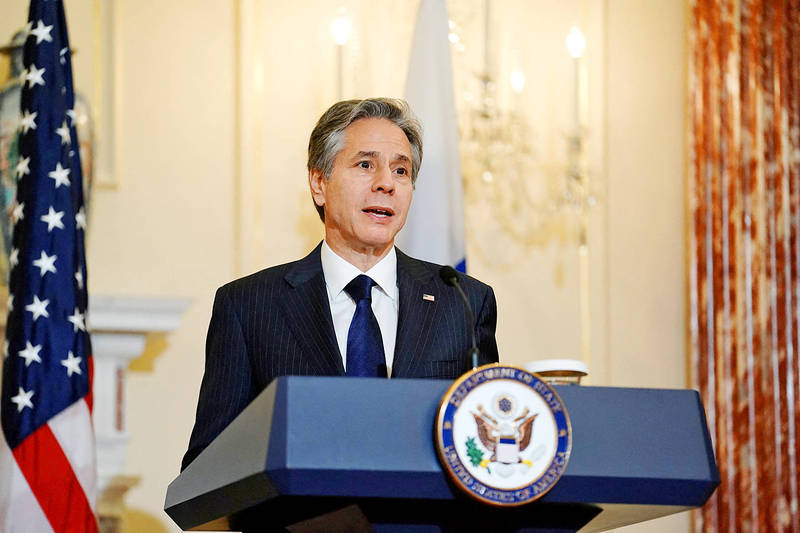 US Secretary of State Antony Blinken speaks at a news conference at the US Department of State in Washington on Friday. Photo: Reuters

‘CONCERNED’: While Blinken criticized the conditions imposed on Michelle Bachelet in China, she defended her trip, saying she told Beijing that it cannot ignore human rights

Minister of Foreign Affairs Joseph Wu （吳釗燮） yesterday warned of China’s ambitions, including the annexation of Taiwan, after the US expressed concern over China’s “efforts to restrict and manipulate” the UN human rights chief’s visit to the Xinjiang region.

UN High Commissioner for Human Rights Michelle Bachelet’s long-planned trip this week took her to the far-western Xinjiang region, where Beijing is accused of detaining more than 1 million Uighurs and other Muslim minorities, forced sterilization of women and coerced labor.

Her visit had already been criticized for failing to secure guarantees of unfettered access to Xinjiang.

“1st they took #Tibet for ‘peace.’ Then they turned #Xinjiang into a de-extremism camp. Now they’re rolling up #HongKong & going after #Taiwan for ‘one #China,’ & far beyond for ‘my ancestors stopped by.’ Aren’t these the signs of a looming world war? JW,” Wu said in a retweet of the recently leaked Xinjiang Police Files.

On Saturday, US Secretary of State Antony Blinken said in a statement: “We are concerned the conditions Beijing authorities imposed on the visit did not enable a complete and independent assessment of the human rights environment in [China], including in Xinjiang, where genocide and crimes against humanity are ongoing.”

“We are further troubled by reports that residents of Xinjiang were warned not to complain or speak openly about conditions in the region, that no insight was provided into the whereabouts of hundreds of missing Uyghurs and conditions for over a million individuals in detention,” the statement said.

“The High Commissioner should have been allowed confidential meetings with family members of Uyghur and other ethnic minority diaspora communities in Xinjiang who are not in detention facilities but are forbidden from traveling out of the region,” it said.

Bachelet defended her visit earlier on Saturday while still inside China, but said any actions by China’s government to address alleged terrorism and reverse what Beijing terms radicalism must not come at the expense of human rights.

Bachelet spoke at a news conference at the end of her six-day trip, which she has repeatedly said was not an “investigation” of Chinese practices in the Xinjiang region or elsewhere.

“I encouraged the government to undertake a review of all counterterrorism and deradicalization policies to ensure they fully comply with international human right standards, and in particular — that they are not applied in an arbitrary and discriminatory way,” Bachelet said.

Her comments were quickly criticized by human rights advocates on social media.

“It is absolutely stunning,” Adrian Zenz, senior fellow in China studies at the Victims of Communism Memorial Foundation, told Bloomberg News of the remarks. “It betrays a lack of understanding or wanting to understand what has been taking place in the region.”

Bachelet said she raised “the lack of independent judicial oversight” of what China refers to as Vocational Education and Training Centers in Xinjiang, but are effectively detention camps.

Yet she was not able to “assess the full scale” of the centers, she added.

Bachelet also described as “deeply worrying” the arrest of lawyers, activists, journalists and others under the National Security Law imposed on Hong Kong by China.

She said it is important to protect the linguistic, religious and cultural identity of Tibetans and that they be allowed to participate fully and freely in decisions about their religious life.

However, Bachelet mostly steered clear of controversy in her news conference. Her most detailed answer was to a question about gun violence and racism in the US from a reporter with Chinese state media.

Bachelet said she was able to speak “unsupervised” with Chinese people. She said she had visited a prison and a former vocational training and education center, and got to interact with a range of civil society organizations, academics, and community and religious leaders.