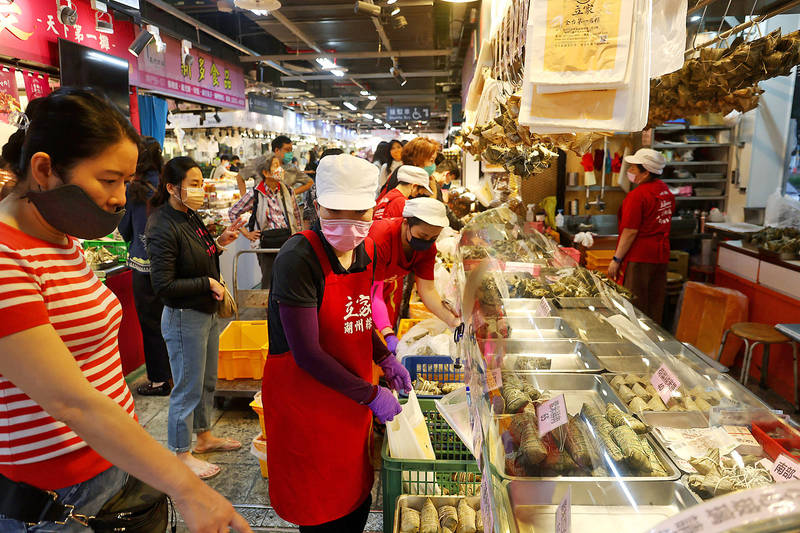 A shopper shops for zongzi （glutinous rice wrapped in bamboo leaves） at the Nanmen Market in Taipei yesterday. Photo: CNA

The Directorate-General of Budget, Accounting and Statistics （DGBAS） yesterday trimmed its forecast for the nation’s GDP growth this year to 3.91 percent, from 4.42 percent previously, as energy price hikes constrain global economic activity.

The US Federal Reserve and other major central banks have raised interest rates to combat inflation and thus rocked global financial markets, as seen in ongoing stock and bond price corrections, he said.

A negative wealth effect would weigh on consumer spending in Taiwan, which is already being affected by a domestic COVID-19 outbreak, Chu said.

That prompted the DGBAS to slash annual growth for private consumption to 3.1 percent this year, a significant decrease of 2 percentage points from three months earlier.

The COVID-19 outbreak could remove 0.5 to 0.7 percentage points from GDP growth, Chu said.

Private investment, a main growth driver due to aggressive capacity expansions by local semiconductor firms, is forecast to advance 4.61 percent, down by 1.04 percentage points due primarily to price adjustments, the DGBAS said.

Consumer prices are expected to pick up 2.67 percent, an upward revision of 0.74 percentage points, given that Taiwan relies on imports to meet more than 90 percent of its energy needs.

Chu said that the projected inflation reading was moderate when compared with drastic increases in Europe and the US.

Soaring energy and raw material prices would likely propel the wholesale price index up by 11.22 percent, 7.76 percentage points higher than forecast in February, squeezing any room for corporate profit unless firms can pass the extra costs to clients, the DGBAS said.

Exports of goods and services are predicted to increase 5.85 percent, up by 0.32 percentage points, while imports could fall by 0.96 percentage points to 4.52 percent, the agency said, attributing the adjustments to price factors.

Demand for digital transformation and technology innovation would continue to create orders for local exporters, the agency said.

The Ministry of Economic Affairs last week said that the restrictions in China had led to “reduced production capacity,” citing problems such as logistics disruptions and shortages of raw materials.

The ministry said it expected export orders to be flat or increase in the second half of the year should the China lockdowns end in the first half and output resume as expected.

Delta Electronics Inc （台達電） chief executive Ping Cheng （鄭平） on Thursday said that although the company’s Chinese plant in Suzhou’s Wujiang District never went into lockdown, it was still “heavily impacted in April, as we couldn’t receive materials from our suppliers in Shanghai and Kunshan.”

He told reporters at a company event that production capacity was down 50 percent as a result.