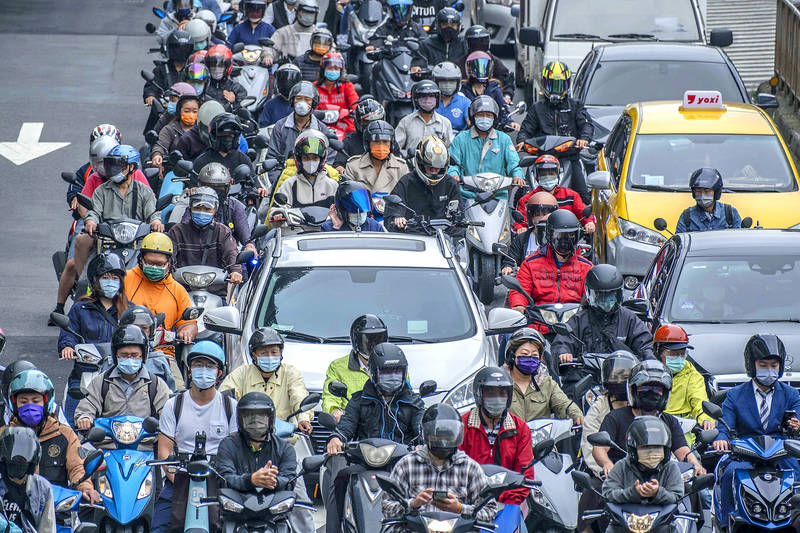 Motorists and vehicles wait at a traffic light in Taipei on Tuesday. Photo: Bloomberg

NEW APPROACH: The talks came after the US announced that Taiwan would not be a part of its IPEF, after some of the participants said they feared retribution from Beijing

Taiwan and the US are planning to announce negotiations to deepen economic ties, people familiar with the matter said, as Beijing cautioned Washington against getting too close to Taipei.

The talks would focus on enhancing economic cooperation and supply-chain resiliency, falling short of a traditional free-trade agreement, the people said.

The deal is likely to include areas of trade facilitation, supply-chain work and trade in agricultural products, they said, speaking on condition of anonymity ahead of a public announcement.

Those elements are similar to the pillars in the 13-member Indo-Pacific Economic Framework （IPEF） that US President Joe Biden announced on Monday during his visit to Tokyo.

While a bipartisan group of lawmakers wanted Taiwan in that group, it was excluded because some nations that agreed to join refused to have Taipei included over fear of retribution from Beijing, people familiar with the process said.

The talks are an effort to elevate the US-Taiwan economic relationship, the people said, and would go beyond existing discussions under a Trade and Investment Framework Agreement between the two governments.

A US Trade Representative spokesman declined to comment on the plans for talks on deepening bilateral economic engagement.

A spokesperson for the Taipei Economic and Cultural Representative Office in the US did not respond to a request for comment.

US Trade Representative Katherine Tai （戴琪） told Bloomberg TV this week that she and her Taiwanese counterpart, Minister Without Portfolio John Deng （鄧振中）, had “very positive conversations” when they met in Bangkok last Saturday.

The two agreed to meet again in the coming weeks to discuss the path forward, the US Trade Representative said in a readout.

A large Taiwanese government and business delegation is expected to attend the SelectUSA Investment Summit outside Washington next month, giving both sides another chance to meet face-to-face.

US officials have said that the reliance on Taiwan for semiconductors in particular is a geopolitical strategic problem and have pushed for a subsidy program that incentivizes domestic manufacturing of chips. That initiative is part of broader legislation that could pass later this year.

Taiwan for years has been pushing the US to negotiate a trade agreement, but US officials have said that roadblocks in Taiwan’s economic practices, including on agriculture, would need to be resolved as a prerequisite for any negotiations to take place.

The administration of former US president Donald Trump, in particular, was hesitant to engage with Taiwan economically while it was negotiating its phase one trade deal with Beijing, people familiar with the deliberations said at the time.