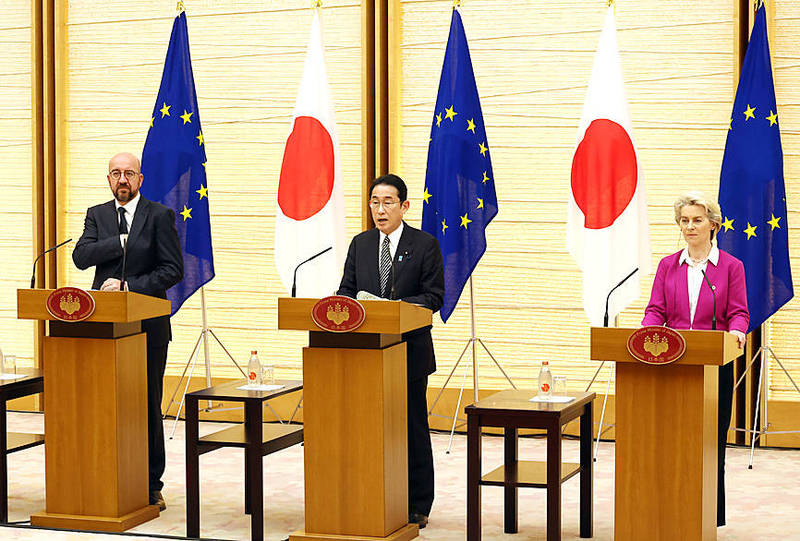 ‘A SERIOUS THREAT’: At a summit in Tokyo, the leaders said they ‘strongly oppose any unilateral attempt to change the status quo by force, regardless of the location’

Japan and the EU on Thursday reaffirmed “the importance of peace and stability across the Taiwan Strait” in a joint statement at their summit, which focused on coordinating strategies in the Indo-Pacific region.

“We underscore the importance of peace and stability across the Taiwan Strait, and encourage the peaceful resolution of cross-strait issues,” said the joint statement, issued at the 28th EU-Japan Summit in Tokyo.

It was the second such reference to Taiwan in a joint statement by the leaders of Japan and the EU, following a statement issued at last year’s summit.

The leaders condemned Russia’s invasion of Ukraine, and demanded that Moscow immediately and unconditionally withdraw all forces and military equipment from the country, the statement said.

The EU and Japan “strongly oppose any unilateral attempt to change the status quo by force, regardless of the location, as a serious threat to the entire international order,” it added.

They vowed to involve ASEAN, South Asian and Pacific Island countries in establishing “synergies” among their strategies to ensure a free and open Indo-Pacific region, it said.

In Taipei, the Ministry of Foreign Affairs yesterday said that Taiwan welcomed the joint statement and expressed sincere gratitude to the leaders of the EU and Japan.

The statement was further testimony that maintaining peace and stability in the Taiwan Strait is a consensus among democratic countries, ministry spokeswoman Joanne Ou （歐江安） said.

Amid challenges posed by aggressive expansion of authoritarian regimes that have undermined the international rules-based order and regional stability, Taiwan will continue to deepen cooperation with Japan, the EU and like-minded countries to safeguard shared values of justice, freedom and democracy, she said.