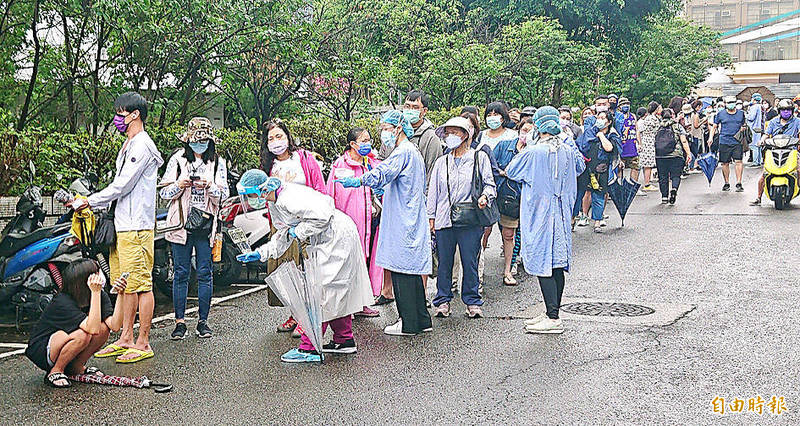 TEMPORARY: The CECC might allow people to import test kits, which would be exempted from customs declarations and reviews, Chen Shih-chung said

The Central Epidemic Command Center （CECC） yesterday said it is considering temporarily allowing at-home COVID-19 rapid test kits to be imported for self-use and has simplified paperwork for physicians to prescribe oral antivirals.

Minister of Health and Welfare Chen Shih-chung （陳時中）, who heads the center, said that people can criticize the center, but they should only do so based on facts.

He made the remark while holding a picture showing a screenshot of a Facebook post Chinese Nationalist Party （KMT） Chairman Eric Chu （朱立倫） made on Monday, written over with the sentence “This is a false accusation,” and “Do not easily believe biased messages,” written on the side.

The post showed an image of Chu and his three suggestions to the government: allowing people to import rapid test kits on their own, providing rapid test sales data online for people to easily purchase them, and creating a legal and reasonable procurement mechanism.

Chen said the government has never banned companies from importing COVID-19 rapid test kits that have obtained emergency use authorization from the Food and Drug Administration （FDA）, adding that businesses have been allowed to import them as long as they follow the procedures.

As there is more demand for rapid test kits, the center is considering temporarily allowing people to import rapid test kits for self-use over the next two months, Chen said.

Imported test kits would be exempted from customs declarations and reviews, but individuals must bear the side effects of the tests themselves and may not sell them.

The CECC said FDA-approved rapid test kits are used for releasing quarantined or isolated individuals, so the agency must review the safety and efficacy of the products.

So far 22 import permits for at-home paid test hits have been approved and more than 14,593,000 kits have been sold, it said.

Chen said 34 new moderate and 14 severe cases, as well 12 deaths from COVID-19, have been confirmed, adding that three previously announced moderate cases have been reclassified as severe cases.

Centers for Disease Control （CDC） Deputy Director-General Philip Lo （羅一鈞）, deputy head of the CECC’s medical response division, said one of the deceased was a pregnant woman from New Taipei City who was in her 20s and in her 30th week of pregnancy.

She received a booster shot in January and had medical record of asthma and anemia. She experienced difficulty breathing and respiratory distress after being admitted to a hospital following her COVID-19 diagnosis, he said.

Doctors performed an emergency cesarean section, but the baby did not survive, he said, adding that the woman died the next day from COVID-19 and acute pulmonary embolism.

Lo said three severe COVID-19 cases, who are in their 20s, 30s and 40s, were hospitalized following traffic accidents and intracerebral hemorrhage, and tested positive for COVID-19 at the hospital.

As there are more moderate-to-severe COVID-19 cases with comorbidities, including people who were hospitalized for another illness or injury before testing positive for COVID-19, hospitals have been encouraged to open more designated COVID-19 rooms to treat such people, he said.

Lo said antiviral medications Paxlovid and molnupiravir were delivered to designated hospitals and pharmacies across the nation last week, expanding their prescription to non-hospitalized people.

The number of prescriptions have increased from about 100 courses per day in the past week to 819 courses of Paxlovid and 218 courses of molnupiravir on Monday, he said.

The center has also simplified the procedure required for the prescription of the antiviral medications, making the process more efficient and convenient for the doctors.